With 21 large format works from the years 1995-2001, the Kunsthaus Bregenz presents the most extensive Jeff Koons exhibition since the retrospective of 1992/93. The exhibition brings together three groups of work in which the central ideas of Jeff Koons work become focused. 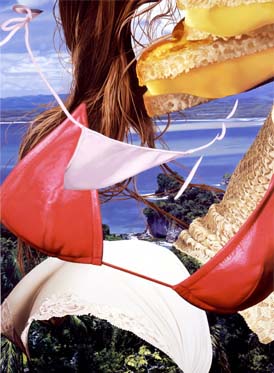 With 21 large format works from the years 1995-2001, the Kunsthaus Bregenz presents the most extensive Jeff Koons exhibition since the retrospective of 1992/93. The exhibition brings together three groups of work in which the central ideas of Jeff Koons work become focused. The show is not a retrospective, but rather it offers an artists view of the idea of the connections between surface and depth, between painting and object, between tradition and modernity.

Therefore, in close cooperation with the artist, we have chosen works from the Celebration series as well as new paintings and mirrors from the Easyfun series and new paintings from the Easyfun-Ethereal series. In the contrast between the childs view in the Celebration and Easyfun mirror-series and the adults view in the new paintings, this selection presents the brilliance of Jeff Koons works in their breaking of European tradition, from Renaissance and Baroque all the way to Surrealism. This artistic approach is expanded and continued with the American tradition of Hyperrealism, Pop, and Minimalism, tied into the positive rationalism of affirmative communication through the ideas of the aesthetic and the object.

Each work group is shown as a unified cyle, each on a separate exhibition floor. The visitor thus wanders in a baroque spiral through the complexity and uniqueness of the individual groups of work and of the whole presentation. The selection of works is deliberately limited to key works. It makes possible, for the first time in Europe - and especially through the integration of new works - a new view of Jeff Koons exceptional position as an artist and as a stimulator of a new way of seeing the world.

The American artist Jeff Koons (born 1955 in York, Pennsylvania, lives in New York) studied from 1972-1975 at the Maryland Institute of Art in Baltimore and 1975/76 at the Art Institute of Chicago before moving to New York in 1977. He financed his first artworks with his earnings as a stockbroker. In the eighties, he became the star of the New York art scene with aesthetic productions of banal household appliances in luxurious display cases and with the Equilibrium Tanks, tanks filled with water in which basketballs float. Soon thereafter, figures made of high polish high-grade steel and rococo-like porcelain figures of postmodern icons such as Michael Jackson and the Pink Panther were created, which he in part had produced by craftsmen in South Tyrol following picture- and color models. These technically perfectly produced pieces represent an ingeniuous mixture of kitsch, sex, and modernity and popularize Marcel Duchamps idea of the readymade, introduced at the beginning of the 20th century.

Taking his orientation along the lines of mainstream culture to even further extremes, Koons, in the late eighties, focused increasingly on the topic of pornography. In 1991, at the height of his success, he married the Italian porno star Cicciolina and made the relationship the subject of his art. The series of works Made in Heaven (1991), which shows Koons with his wife as larger-than-Iife figures having sex, gained him widespread international attention. In 1992/93, Koons, meanwhile divorced from Cicciolina, showed his complete works in a travelling exhibition at the Stedelijk Museum in Amsterdam, the Staatsgalerie in Stuttgart, and the Museum of Modern Art in San Francisco, among other institutions. Since the mid-nineties Koons has been working on the series Easyfun, Easyfun-Ethereal and on Celebration, his largest project so far, which comprises numerous monumental sculptures and paintings.