Something's Old and Something's New. This exhibition includes works that have never been shown before, such as "Reverse glass paintings", oils, drawings and large new mixed media paintings on paper. 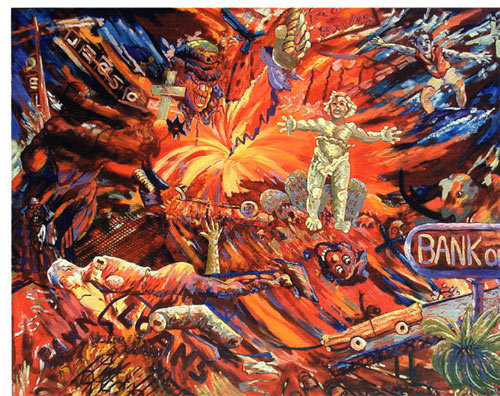 This exhibition will include works that have never been shown before, such as "reverse-glass paintings," oils, drawings and large new mixed media paintings on paper. A screening of new video art pieces will also be shown at the Closing Reception.

Lucinda Luvaas is a multimedia artist working in fine art and video. Her films and fine art have been screened and exhibited both nationally and abroad. Upcoming exhibitions include: Espace Dialogos, Paris, France/May-June, AtelierAzur, Oslo, Norway/October, VideoMation, NYC/March-April, Bloomsburg University, PA/July, The Holter Museum of Art/January-March, and The Saginaw Museum, MI.

Lucinda Luvaas works in two basic modes--spontaneously--with little preparation and In contrast, she creates bodies of work that are very exacting, the opposite of abandon. For example, "reverse-glass" paintings are very exacting and hard to work with. What makes them so special is the luminosity of color that can be achieved.

Color drawings are made before any paint is put to glass. Everything is planned in advance. The glass pane is coated with damar varnish and sanded to give the surface some tooth. The drawings are transferred onto the pane in reverse. What you view when you look at a glass painting is the front, not the side of the pane that's painted. These pieces are done in oils using a buttery texture. The paint is smoothly applied and when it's viewed on the opposite side there are no brush strokes to be seen.

The artist learned the basic techniques while traveling to Europe on a Yugoslav freighter. A number of the seamen did "reverse-glass," paintings in their leisure time and she watched and learned from them. "LA Fever," and "The Last Stand," two other works in this exhibition, are examples of pieces that have some planning but are far more spontaneous than the glass paintings shown here.