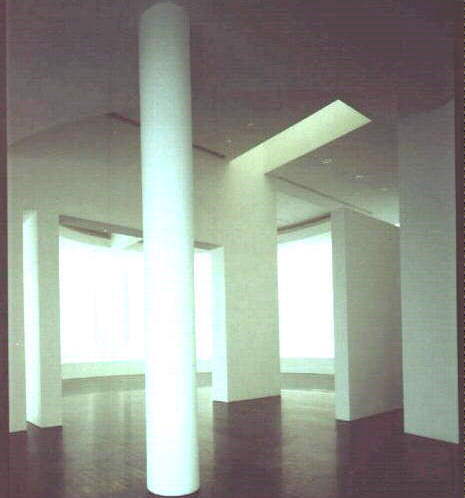 "To the Supporting Actors".
The project To the Supporting Actors ("Als actors secundaris"), to be presented at the MACBA from March to May 2000, is Pep Agut's critical response to the notion of the retrospective exhibition. With a title derived from the film Der Stand der Dinge (The State of Things, 1983) by the German director Wim Wenders, the show is structured as a false retrospective which apparently brings together the most significant works of his artistic output over the last decade. In this case, however, the ultimate material result of this process of collaboration between the artist and the museum will crystallize in a series of "works" created specifically for the occasion. In the light of this, it can be said that the museum will exhibit the testimony of a past that not even the artist himself has ever seen in material form.

Some eighty per cent of the work conceived by Agut over the last ten years has no physical existence. The possibility of occupying the rooms of the institution in order to express the "state of things" in his recent artistic career has led him precisely to problematize the function of conserving a physical heritage that has conventionally characterized the museum. It could be said, then, that in To the supporting actors the potential past history of the artist will be rewritten in the present, thus configuring a kind of "site specific" complex consisting essentially of five physical actualizations of existing ideas.

For Agut, the concept of retrospection traditionally applied to exhibitions of art is established around an idea of tribute to and review of a more or less closed, and in this case personal, project which confirms itself as stable, as a commonplace and legitimate reference of use. Sceptical of the possible power which the passage of time confers on all representation, in that this is traditionally legitimated by the public institution, the artist proposes on this occasion to reverse the process: to represent the outlines of a hypothetical personal artistic history using only the testimonies specifically elaborated for a concrete present: the exhibition To the supporting actors.

JosÃ© Luis Brea has described three moments in the evolution of Pep Agut's work during the last decade which at the same time mark out the central questions that will be developed in this false retrospective. A first phase of contact with the immediate universe of the surface of the painting, which would have its nucleus of analysis in the investigation of the linkages and standards of the problematic space of representation. A second phase in which, in the form of large-scale installations, the artist put forward his reflections on the structural conditions imposed by the space of representation. And, more recently, his recourse to the medium of photography in order to articulate a reflection on the logic of the vision and the reading, finally embracing once again his never entirely disavowed condition of painter.

In To the supporting actors the notions of artist, audience, representation, word and image coincide ambiguously in the scenario provided by the museum. In the case of Pep Agut, the word is no more than the trace of a fruitless effort to arrive at an image of something that might be regarded as "truth". Thus he investigates the nature of the respective positions of spectator and artist which condition the structure and the day-to-day practice of language. Silence and blindness are the two extremes of the experiential arc offered by an exhibition designed to be looked at, to be touched and -even more importantly- to speak of the threshold which separates reality from representation in the interstice where the private and the public merge with one another in the ethical exercise of art.