Before and After Minimalism

A Century of Abstract Tendencies in the DaimlerChrysler Collection 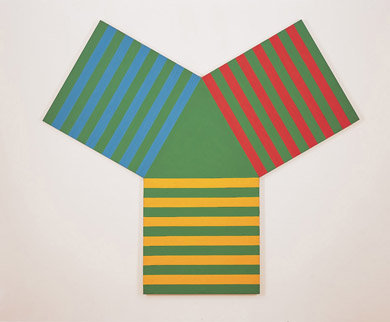 A Century of Abstract Tendencies in the DaimlerChrysler Collection

The artistic current known as Minimal Art and especially the installations and objects of the representatives of classical 1960s Minimalism – artists such as Carl Andre, Dan Flavin, Donald Judd and the recently deceased Sol LeWitt – have made such an impact on the genre that it is often perceived as an autochthonous and purely North American phenomenon. That said, beyond the circumstance of its American birth, perhaps Minimalism does not consist so much in a thematic current but, more likely, in a kind of pluralism that is based, above all, on abstraction, constructivism and formal reduction.

Based on that argument, the exhibition Before and After Minimalism: A Century of Abstract Tendencies in the DaimlerChrysler Collection reveals the formal minimalist approaches and typical geometric abstractions of minimalist works in an essentially broader context. What is clear is that the origin of the procedures and methods of minimalist practices should also be sought in the abstract and constructivist tendencies born in Europe at the beginning of the 20th century. It reveals the many parallels that exist between the procedures and methods of European and American artists; as much among those of the postwar generation as among those contemporaries who partake in minimalist tendencies or invoke European abstraction and constructivism as their historic predecessors.

Insofar as one contemplates Minimalism from that perspective – more methodological than thematic – it ceases to be solely an American current from the 1960s and emerges as a characteristic, a sort of “minimal” common denominator, in the works of artists of highly diverse periods and places. The exhibition, therefore, is comprised of works that embody the distant ancestors of Minimalism in European abstract painting of the early 20th century, especially in southern Germany. It also features those who have incorporated the traditions, pictorial abstracts and minimalist tendencies of that century and those who continue working with these attributes into the present day on the two continents.

This contextualization of the diverse minimalist tendencies is one of the most characteristic aspects of the DaimlerChrysler Corporation’s collection, to which belong all of the works exhibited here. Thanks to this collaboration we have been able to present, for the first time, a panoramic display of the pioneering figures of the vanguard predecessors of European and American minimalist currents. That said, the exhibition does not focus on “classic” Minimal Art from the 1960s, with the exception of the works of Jo Baer, Elaine Sturtevant/Frank Stella, Michael Heizer, since it is already well represented in Spanish collections. Classic Minimalism has already been the subject of numerous exhibitions in Spain and the rest of the world, as Dr. Renate Wiehager points out in her extensive introductory essay in our exhibition’s virtual catalogue. Exhibitions in Spain range from Minimal Art at the Fundación Juan March (1981) to the recent minimalismos at MNCARS (2001).

In order to show the links between Europe and the United States, the exhibition reveals a panorama of artists whom, up to the present day, have worked or are working with the language of abstraction and with various minimalist tendencies. They are each uniquely reinterpreting the essential characteristics of those currents and applying them to others that preceded them such as De Stijl, the Abstraction-Création group, the Bauhaus or the Zurich Concrete artists. Like the Hard Edge painters of California’s Abstract Classicism or the extremely new Neo Geo, they keep their spirit alive and maintain their methodological characteristics.

The exhibition, which occupies the entire second floor of the Museu d’Art Espanyol Contemporani de Palma, was organized in close collaboration with Dr. Wiehager, Director of the collection, and includes 64 works by 41 artists. The vast majority are paintings but there are also graphic works, sculptures, installations and videos by European and North American artists, from the earliest works of Adolf Hölzel (1853-1934), noted teacher at the Stuttgart Academy, to artists such as Vincent Szarek (b. 1972).
Distinct from other modern and contemporary art collections with more general objectives with regard to their representation of art, the DaimlerChrysler Collection, as of 1977, took advantage of the presence of Daimler-Benz AG in Stuttgart – although it also has headquarters and plants worldwide – and focused their collecting on the origins of abstraction. They focused on the Stuttgart Academy and Hölzel, a true pioneer of abstract art, whose teachings would later influence the professors of the Bauhaus. With selective criteria and growing internationalization, the collection, comprised of approximately 1,500 works by some 400 artists, has continued to expand its holdings of art by the Abstract-Constructivists, Conceptualists and Minimalists. They also promote and develop scientific documentation, cataloguing and study and disseminate this information via publications and exhibitions and, in some cases – as in this one – in cooperation with other collections, institutions and museums around the world.

The Fundación Juan March would like to thank the DaimlerChrysler Collection for making this exhibition possible and especially to Dr. Renate Wiehager and her staff for their extraordinary collaboration in every aspect of its organization.