In "2420 Ciurlionis", by using various conceptual or clearly fictional methods, young Lithuanian artists reconstruct the mythology of the "Ciurlionis asteroid phenomenon", to re-establish the connections with it. "Extreme Crafts" includes several sections, from a gallery showing objects and documentation of work being made by self-organised groups and individuals across the globe, to politicised handmade objects. Curated by Valentinas Klimasauskas, Catherine Hemelryk and Jennie Syson. 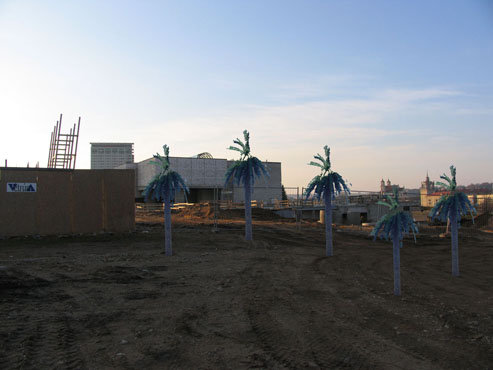 On 25 May the CAC will become a channel, router, agency, receiver, broadcaster, etc. which will have a real time connection with an exhibition taking place on the asteroid called 2420 Čiurlionis. By using various conceptual, pseudo-documentary or clearly fictional methods, young Lithuanian artists are going to reconstruct the mythology of the Čiurlionis phenomenon, to re-establish the connections with the exhibition on asteroid and the asteroid itself.

But let's start from the start. In 1913 on an expedition through the Arctic Ocean the painter Pinegin turned his attention to a plateau on the Franz Josef Land archipelago, which resembled the painting Stillness by Mikalojus Konstantinas Čiurlionis. Pinegin called this place the Čiurlionis Mountains.

In 1975 the Crimean astrophysicist Nikolaj Cernych discovered a new 8 km diameter asteroid that also reminded him of something or someone – he called it the Čiurlionis asteroid. By now there are many things that have the name of Čiurlionis including the peak in the Pamir Mountains, museums, schools, orchestras, galleries, roads and other things.

In 2007 many questions were raised during the press conference of the exhibition that was organised on the asteroid 2420 Čiurlionis. Here are just few of them:

Why does the exhibition have the same name as the asteroid? What does it mean to give a title to something? Does it mean to remix contexts and mythologies?

Is this true that contemporary art is always alien to the local context (as once was stated by Raimundas Malašauskas)?

If the exhibition at the CAC is going to be the channel / accelerator / traffic office / informational centre / board of the advertisements and directions / connection / router / amplifier / speaker / agency / etc. what position should artists take then?

Donatas Jankauskas is not just the look-alike of Čiurlionis, he also uses the dribbling techniques of the basketball player to remix Čiurlionis albums. This time he created the t-shirts using the images of the painter and “Ape planet” movie, in which humans regress and the ape progresses. Does the future mean regression or is the future a paradise of (techno) animalism?

Kęstutis Šapoka mixes the contexts of time and culture by presenting a script from the discussion in the Lithuanian Soviet Artists Union meeting in 1960s – the topic was whether to save or ban Čiurlionis' oeuvre. Is the re-contextualising just one of the time machine's options?

Has Juozas Laivys' gesture of releasing the air (which he held inside his lungs while he read a text about first ever Lithuanian art exhibition 100 years ago) the same connotations as it would have if the air was released in the airless space on the asteroid?

The exhibition on the asteroid raised real estate prices and forced the local artists to move out. What is the artists' destination point now?

Čiurlionis created non-abstract plots in his paintings by using clouds and other ephemeral or symbolic substances. Saulius Leonavičius and Jurga Juodytė are doing just the opposite – they relocate the clouds into an urban landscape to create new informational vectors. Is there a possibility that the fog will turn into keywords' clouds?

The German composer and synesthesiac (a person who sees music in colours and an attribute of Čiurlionis) Karlheinz Stockhausen says that he came here from the satellite planet of Sirius, which is eight light years away. His piece Sirius is created to welcome arriving aliens from other civilisations. I wonder if the cocktail menu created after Stockhausen's 'Studie II' functions in the same way?

If to pay attention to the fact that this exhibition is organised using nationalistic criteria (this is a Lithuanian young artists' show), so it may be true that this asteroid might be a new Lithuanian colony, the new version of the old dream by Kazys Pakštas to shift Lithuania to Madagascar? So, is the asteroid 2420 Čiurlionis the new utopian Madagascar in the age of space war and ecological catastrophe?

Is there a possibility that asteroid 2420 Čiurlionis is going to crash into the Earth? If yes, who is going to save us from it? Bruce Willis? Again? What about Arnold Schwarzenegger who was caught by Laura Garbštienė as he was palming the roe? At least, Arnold knows how to use time machine as he has used it so many times in the Terminator films.

Let's come back into the year 2007. The asteroid is flying further. It is clear that it's not going to crash into the CAC, or Earth. The catastrophe will not take place (but the exhibition will). Most probably there will only stay the feeling of catastrophe, but this is the essential to balance consumerism (consumerism is always connected to optimism). There is no Schwarzenegger around as there is no need to save the planet.

The time (and context's) machine is activated. The asteroid 2420 Čiurlionis continues its flight in orbit.

Customisation is also experiencing a renaissance. Technology, perceived to be removed and sophisticated, is being re-attached to the user by the democratic "anyone-can-make-and-do" accessories such as the knitted iPod cover or mobile phone pocket or diamante decoration. And although thrift-store chic is being co-opted by design firms and marketed back to the public, self organised groups of artists and makers are creating forums for people to do it for themselves.

This is demonstrated by those at the peripheries of commercial regions, such as the Favelas of Brazil or the weaving centres of Kumasi famed for making Kente cloth in Ghana. Crafts are thriving in these places and represent a valuable cultural yet marketable contribution to the global economy. Often they reflect the modern technological world through the recycling of its detritus. Bowls are made from telephone wires, bicycles made from circuit boards and cans and coffins are carved in the shapes of Coca Cola bottles or cars. Making continues regardless of circumstance.

Craft creates the connotation of the intimate and handmade. It implies working in hand-sized proportions, but many makers are experimenting with scale. Tiny techniques are blown up and new materials are employed to reinterpret traditional skills on a grand scale. Gestures become bold statements through expansion. In a countermotion, many makers are also refining their skills to make ever-smaller constructions. Echoing the developments in engineering and nano-technology, the facture of miniatures has proliferated. Objects and entire environments that could sit on the head of a pin test their makers.

Programmes such as Craft Corner Deathmatch and a proliferation of user-groups dedicated to all kinds of craft interests are booming, but why is this happening now and just what constitutes craft - the often maligned place between the art and design? By taking it to the extreme, finding the vanguard, Extreme Crafts presents just a small selection of possible answers to the question: What can contemporary craft be?

Extreme Crafts at the Contemporary Art Centre, Vilnius takes the form of an international exhibition, events and a "things-to-make-and-do" catalogue containing essays, patterns and ideas. The exhibition has several sections, from a "rogue's gallery" showing objects and documentation of work being made by self-organised groups and individuals across the globe, to politicised handmade objects. Subverted ideas of national identity as expressed through regional crafts, sitting side-by-side mutated folk traditions and much more. Crucial to Extreme Crafts is not only the product of craft, but the process of crafting: the gallery spaces will be activated by different groups invited to demonstrate their activities and importantly, visitors will be encouraged to participate.

In the Rogues Gallery: Anna Dumitriu, Anneke van Bommel, Bean Gilsdorf, Becca Wilson, Bernadeta Levule, Baroness Carrie von Reichardt, Clémentine Fort, Clôde Coulpier, Derbyshire Well Dressers, Horst Schulz, James Ford, Joan Ainley, Josie Long, Julia Douglas, Kate Pemberton, Nomeda & Gediminas Urbonas, Rüdiger Schlömer, Ruth Claxton, Sandra Straukaitė and many more...
Handicrafts are increasingly being used by artists and designers as a source of inspiration and method of manufacture. Many crafts are experiencing resurgence in popularity; they are no longer the bastion of elderly ladies, but people from all ages and backgrounds. Punk knitting, origami with an agenda and epic cross-stitch have surged in numbers. In wake of the supposed death of local community, self-organised craft groups such as 'Stitch and Bitch' have flourished in recent times.