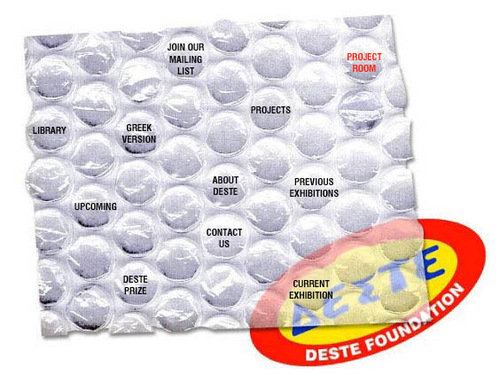 The opening of the Deste Prize 2007 Exhibition will take place on Thursday, 24th May 2007 at the Deste Foundation's Centre for Contemporary Art. The Deste Prize was established in 1999 as an inseparable part of the Foundation's overall policy of supporting and promoting contemporary Greek art and is awarded every two years to a young Greek artist living in Greece or abroad.

The exhibition, which will run until Saturday, 3rd November 2007, will feature works of the six (6) artists, namely Loukia Alavanou, Nikos Arvanitis, Savvas Christodoulides, Socrates Fatouros, Yiannis Grigoriadis and Eleni Kamma, who were shortlisted for the Prize by this year's Selection Committee.

The six artists are currently in the last stages of preparation as they will all present new works on this occasion.

Loukia Alavanou's double video-installation, titled Chop Chop is a pastiche of images taken from horror films and animated cartoons that conflates the boundaries between reality and fantasy. The work attempts to comment on the process of passively experiencing the reality of spectacle: especially that of the spectacle of horror channeled through the movie industry and the Mass Media.

Nikos Arvanitis' installation Gimmie, Gimmie, Gimmie probes the extent of our dependence upon the power of authority and control, focusing on electrical power both as a necessary condition for the advancement of technology and as a formative factor for the individual's mental and psychological being.

In Savvas Christodoulides' construction titled A Place in a Garden, two wooden beams converge in order to support the frame of an armchair on whose arms are perched birds of the same material. The work's central part, the armchair, evokes the image of a "place-receptacle" for the living body that is hospitable par excellence, allowing the individual to perceive and contemplate space, time and the notion of continuity and to form a clear concept of such conditions. The birds (in this case, eagles) appear to be an organic feature of the garden, lending the work a subtle quality of political dissonance.

Socrates Fatouros' Royal Couple is a sculptural installation consisting of two forms with pronounced pictorial qualities, which develop vertically in space to create a new shape. The relationship of dialogue and interdependence between these two parts is not a forced or compulsory one, but rather one in which both are mutually complemented. It thus gives rise to a new "whole", which stands at once as a "boundary-obstacle" and as a reminder of the notion of unified, unbreakable form.

Yiannis Gregoriades takes on the role of the contemporary flâneur, so that he may continue to explore and document built space through a new series of works that bears the general title Yugo Panoramic. The series consists of photographs and videos focusing on the new monuments and scenes of everyday life in the cities of former Yugoslavia. The works serve as a tool in the search for those notional devices that will enable us to interpret the wider region of the Balkans.

Eleni Kamma uses the dual identity of the common dandelion (Taraxacum officinale) – a plant possessing medicinal properties yet considered a weed by gardeners –as a starting point for her work. Her drawings and models are parts of a system marked by discontinuity, rupture and the intersection of binary structures. Through her work the artist calls upon the viewer to ponder issues of order, hierarchy and identity.


The DESTE Prize was established in 1999, as part of the Foundation's policy of supporting and promoting the work of the emerging generation of contemporary Greek artists. A six-member Selection Committee comprising of selected Greek curators, critics, collectors and artists nominate up to 36 candidates (up to 40 years of age) from which six will be shortlisted for the 5th Deste Prize and they will participate in the 5th Deste Prize exhibition at the Foundation (May to October 2007). An international Jury of five comprising of a distinguished team of museum directors, curators, art critics and the President of Deste, Mr.Joannou, will select the winner and the award of 10.000 euros will be presented to the winner during an award ceremony in September 2007.