What Time Is It on the Sun? Finch blends scientific method and a poetic sensibility in his work. Using a range of media including pastel, watercolor, photography, glass tile, video, sculpture, and light installation as well as unexpected materials (ranging from Tang to invisible ink) he attempts to depict the most elusive of subjects - wind, candlelight, even the scent of Brooklyn's Gowanus Canal. 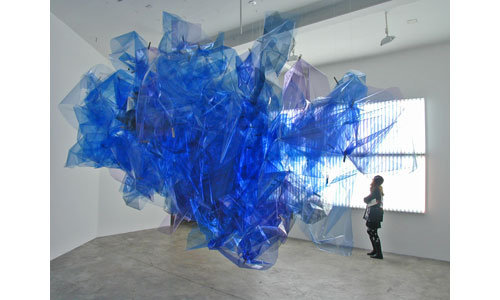 What Time Is It on the Sun?

Spencer Finch wants us to consider the question: Is it possible to see yourself seeing? As he explains: "There is always a paradox inherent in vision, an impossible desire to see yourself seeing. A lot of my work probes this tension; to want to see, but not being able to." He explores that challenge and the mechanics and mysteries of perception in a landmark exhibition which opens May 26, 2007 including over 40 works - comprising more than 160 pastels, 62 photographs, 6 major sculptural installations, plus a 30-foot long drawing -- made over the last 14 years . Spencer Finch: What Time Is It On the Sun? will include four major new works, two of which are site-specific installations created for MASS MoCA. The exhibition will run through Spring 2008.

Finch blends scientific method and a poetic sensibility in his work. Using a range of media including pastel, watercolor, photography, glass tile, video, sculpture, and light installation as well as unexpected materials (ranging from Tang to invisible ink) he attempts to depict the most elusive of subjects - wind, candlelight, even the scent of Brooklyn's Gowanus Canal.

A review in Artforum cites a scene from the Jim Jarmusch film Mystery Train where a young Japanese couple are sitting in their Memphis hotel room. "As the guy keeps snapping pictures of their room, his girlfriend asks why he takes photos of their rooms and not the sites they visit. He replies, 'Those other things are in my memory. The hotel rooms and the airports are the things I'll forget.' Finch has a similar method for remembering a place or evoking a feeling: drawing his eye and not the object of his gaze, or re-creating only one element of a sensorial experience."

The paradoxical exhibition title refers to Finch's interest in limits of logic and vision as well as the importance of light in his work. According to Finch, "Ultimately the sun is always the impossible goal of my work - always the goal, always absent". Reaching across time and space, the light of the sun has preoccupied philosophers and artists, like Finch and Monet and Turner before him, throughout history.

Finch focuses on sites that captivate the popular imagination. Through travel to and study of storied locales like Loch Ness and the Grand Canyon he addresses the intersection of history, memory, and perception. Using unconventional materials, he has rendered the sky over Roswell, New Mexico, in glittering rhinestones and the clouds above the beach at Coney Island as purplish-blue balloons.

In a gallery facing the museum's entrance courtyard, Finch will create a luminous wall of stained glass, one of two site-specific works created for MASS MoCA. In this yet-to-be-titled installation, the colored glass panes, a mix of yellow, red, and grey, will transform the sun's light into the intimate glow of a candle's flame. In a different north-facing gallery, Finch will use colored lighting gels to filter the local sunlight to match the light he has measured daily in his Brooklyn studio since January 1, 2007. Like a wall calendar each window pane will correspond to a particular day. The gels will cover just a portion of each pane, allowing visitors to experience the light of two different places and times simultaneously.

In addition to the site-specific installation, new work in the show includes West (Sunset in my motel room, Monument Valley, February 26, 2007, 5:36 - 6:06 pm) (2007), exhibited only once before. The piece replicates the waning light of sunset with the light projected from nine video monitors. The monitors play a selection of stills from John Ford's 1956 epic Western The Searchers which change once a minute over a 30-minute period mimicking the color and intensity of the fading twilight Finch precisely measured in the Monument Valley desert. Another new still-to-be-titled work replicates the wind blowing across Walden Pond's wooded shores as described by Thoreau. This piece complements Finch's earlier installation Sunlight in an Empty Room (Passing Cloud for Emily Dickinson, Amherst, MA, August 28, 2004) (2004), an homage to another New England-based luminary. These works will be shown alongside Composition in Red and Green (2000) a nod to Isaac Newton and his epiphany. The work, which features a suspended chute that drops apples onto a green carpet, adds smell, sound, and motion to Finch's interpretation of the still life.

Finch will reconfigure for MASS MoCA's space Night Sky (Over the Painted Desert, Arizona, January 11, 2004) (2004), an installation that attracted much popular and critical attention at the 2004 Whitney Biennial. Hung from the ceiling, the light work, which is based on the molecular structure of the chemicals in a mix of pigments, hovers overhead the atom-like bulbs glowing like stars.

Other Works in Exhibition

MASS MoCA's Prints and Drawings gallery will be devoted to Finch's substantial early work Trying to Remember the Color of Jackie Kennedy's Pillbox Hat (1994.) The 100 different pink drawings that make up the installation represent Finch's attempt to remember an iconic object attached to one of the most reproduced and remembered events in American history. The work is dogged in its pursuit of accuracy while underscoring the futility of the task. The work's exhibition at MASS MoCA will be one of only a handful of times it has been shown in its entirety since 1994.

102 Colors from My Dreams comprises 102 watercolors. Between November 21, 2000 and May 1, 2002, Finch kept a dream diary at his bedside, in which he would record as best he could remember the colors from his dreams. Attempting to recreate the most distinctive colors from memory, Finch mixed various inks until he found the tones that matched most faithfully what he had recorded in his diary. He then poured drops of the colored ink on to square sheets of paper and then folded each sheet, which when opened again revealed a series of abstract Rorschach-like blots. For Finch the Rorschach-blot also offered the most appropriate form for thinking about the abstract expression of the unconscious.

Two mosaic works from 1998 which at first appear abstract, are actually based on photographs that depict white-out conditions on some of the world's highest peaks (Mount Everest, K2) are from an installation called Wandering Lost Upon the Mountains of our Choice. His Peripheral Error (after Moritake) (2004) is series of watercolors which depict images of butterflies as seen in his peripheral vision. Interior of Room 4, Hotel de la Cathedrale, Rouen, May 18 -22, 1996, morning effect, noon effect, evening effect (1995) is an homage to Monet's paintings of the changing light on Rouen's cathedral. Finch focuses on the light in his hotel room across the street from the cathedral Monet memorialized.
A gallery will also be devoted to his nuanced studies of darkness while another will feature a selection of "white" drawings documenting the almost imperceptible traces of melting snowflakes and the sun's oxidizing effects on paper.

Several works made in the artist's family home in nearby Vermont are included. For 42 Minutes (After Kawabata) (2004), the artist shot seven photographs of the view outside his window. Taken seven minutes apart in the waning light of dusk, the photographs capture the magical moments during which the window transforms from a clear pane showing the sunset to a mirror reflecting the interior of the house.

The performance-based work Self-Portrait as Crazy Horse, first created in 1993, will be performed for the sixth time for the MASS MoCA exhibition. Transforming the gallery into camera and dark room, Finch prepares a gallery wall with light sensitive chemicals used to create a cyanotype. Positioning himself between the wall and a window, the artist stands motionless between dawn and dusk while light pours over him. While the rest of the wall turns blue, the area in shadow remains a ghostly white. Referencing the American Indian's fear of photography, the work hints at Finch's own skepticism of the medium.

MASS MoCA members and the public are invited to the opening party for Spencer Finch: What Time Is It On the Sun? The reception will take place on May 26 from 6 - 8 PM. Members are admitted free; there is a $8 admission charge for non-members. Wine for MASS MoCA receptions is provided by Barefoot Wine.

The weekend marks the opening of the summer season at MASS MoCA and the beginning of the center's eighth year. An opening concert featuring several Bar None Records artists will take place on Sunday, May 27. While the performers are still to be confirmed, the roster is likely to include Freedy Johnston.

Finch was born in New Haven, Connecticut in 1962. He received a degree in comparative literature from Hamilton College and an MFA from the Rhode Island School of Design in 1989. The artist has had solo exhibitions at ArtPace, San Antonio; Portikus, Frankfurt am Main, Germany, and the Wadsworth Atheneum, Hartford. His work has also been presented at the Barbican Centre Art Gallery in London; the Jewish Museum, New York; Museum für Neue Kunst, Karlsruhe; and the Whitney Museum of American Art, New York, among others. His work is in the collections of the High Museum of Art, Atlanta; Hirshhorn Museum and Sculpture Garden, Washington, DC.; Museum für Moderne Kunst, Frankfurt am Main; and the Solomon R. Guggenheim Museum, New York; among others. The artist lives and works in Brooklyn.

Monograph to be published

A monograph on the artist will be published in conjunction with the exhibition. The fully-illustrated, 192-page publication will feature three essays and an extensive plate section highlighting over 30 selected works with both images and text. Authors include exhibition curator Susan Cross as well as Daniel Birnbaum and Suzanne Hudson. An exhibition history and bibliography will also be included. The hardcover catalogue, which features a unique slipcase and three artist projects, will be distributed by D.A.P.