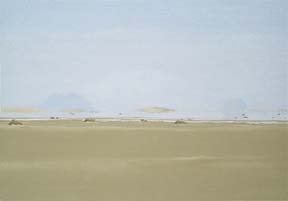 Some exhibitions require longer pregnancies than others to see the light of day. Similarly an artist's project may seem stranger than others. So it was that 4 years ago Peter RÃ¶sel took us on a mirage hunt. Year after year the project was postponed, so he could grasp the infinite subtleties of those mysterious landscapes that only last a few minutes. The setting: Namibia, mostly haunted by diamond hunters. Desert scorched by the sun and a long coastline framed by an inhospitable ocean. In the middle of this no man's land, an artist, with his 4WD, his water-bottle, his easel, his canvases, his tubes of colors, and a little textbook on how to paint landscapes. Let us be clear: Peter RÃ¶sel is not a painter or, rather, he did not use to be a painter. He is, above all, an artist who hugs his projects without special regard for one technique in particular. On top of its non-temporal qualities, this Fata Morgana Painting Project brings out a very personal and topical point of view in the heated debate on virtual reality.

Freely echoing the atmosphere created by this central exhibition in our re-opening programme, we shall propose one evening screening of video films where the desert is omnipresent. The Dutchman Joost Conijn's film unveils his crazy venture: building an aircraft piece by piece and making it fly. The Finn Veli GranÃ¶'s "documentary" centers on the extraordinary destiny of Paavo Rhakonen, who spent his whole life dreaming that he would go and live on another planet. Vacancy, a film by Matthias MÃ¼ller, presents Brasilia, alternating views of the birth of this utopian city and its disillusioned present. Finally, a video by Bill Viola, shot chiefly at Chott el-Djerid, offers a new approach of mirages, something between meditation, hallucination and a reflection on the limits of pictures.

On the occasion of this second series of exhibitions in the new spaces of attitudes, architecture will again be present, this time showing four villas built in "the green Genevese city", by Andrea Bassi, a Ticinese architect established in Geneva. These houses, where inside and outside are intertwined in a most subtle manner, will be shown through a combination of dia viewers, thus confirming that recent quality buildings do exist on Genevese territory.

The artwork realised by Fabrice Gygi in our courtyard will be host to two installations by JÃ©rÃ´me Leuba. That project inaugurates a new collaboration with the Fonds d'art contemporain de la Ville de GenÃ¨ve (Fmac). Hereafter, from time to time, attitudes will present works from the Fmac collection, enabling the authors to display a recent piece of work or present a specific project within the framework of Gygi's installation.

meetingpoints is a community of artists from the Geneva Ecole supÃ©rieure des beaux-arts who intend initially to continue their activities in Geneva, Paris, Rotterdam or North America. That community functions as a network, following an organigram that underlines the skills and interests of each member while placing them at the disposal of all. A modular cupboard will store the memory of works in progress, whether as audio CDs, CD roms, video tapes or CDs, printed material, objects, etc. This material will be available for consultation on the spot. This marks the beginning of our collaboration with meetingpoints, for that piece of furniture is to be shown later in various combinations. Moreover it will be duplicated and shown in other international artistic spaces, with attitudes remaining the Swiss base of the project.

With revolver, a publishing house founded in 1999 at Stuttgart by Christof Keller and operating as a "gallery in book format", printed material will play an important role. In that way we shall present an overview of the production of what is, in our view, one of the most relevant art publishers, particularly as regards the present interpretation of an artist's book.

The journal nÂº 2 presents also the ups and downs of General Document, the pungency of Santa Lemusa and a quiet landscape by Emmanuelle Antille, which is also part of the 2001 edition of attitudes.