Sasnal's fascination for the unexpected detail within our shared reality permeates his work. The artists is showing new paintings, drawings and a 16-mm film. Maria Lassnig shows her recent, large-format oil paintings in which the artist portrays herself in various moods and physical states. 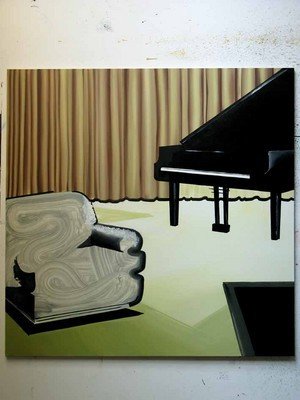 WILHELM SASNAL (b. 1972) is one of the most important artists of his generation. The Kunstverein Frankfurt and the Van Abbemuseum in Eindhoven, in a joint project, dedicated a major solo exhibition to the Polish artist last year. Other key solo exhibitions have been held at the Douglas Hyde Gallery in Dublin (2006) and at the Berkeley Art Museum (2005). In November 2006 the artist received the prestigious Vincent Van Gogh Award.
For his second exhibition at Hauser & Wirth, Sasnal is showing new paintings, drawings and a 16-mm film.
Throughout his work WILHELM SASNAL combines references to political events, to art and cultural history with snippets of personal experience and everyday life. The breadth of his interests, once transferred into his work, eschews any sense of hierarchy. Within his paintings the eclecticism of his subject matter is matched by a relentless stylistic experimentation. In a continuously evolving aesthetic he quotes art historical styles, everything from Tachism to Geometric Abstraction and Photorealism to Pop Art, bending each genre to his chosen subject and submitting it to his own new interpretation.

Sasnal’s fascination for the unexpected detail within our shared reality permeates his work. Selecting from what at times can be an almost overwhelming level of stimuli that makes up our daily existence, Sasnal often hones in to focus on an unexpected element. He absorbs information, on occasion borrows imagery from the Internet or elsewhere and views it from a novel angle. Yet somehow, through this highly subjective selection and means of expression, he creates an air of objectivity. There is a sense of detachment, which often leads to a feeling of unease. His new exhibition centres on the figure of Elvis Presley. Music is one of Sasnal’s passions and it is a recurrent influence in his work; record sleeves, portraits of musicians and clips from music videos have all served as starting-points for his works.

The 16-mm film projection is based on found-footage from the late 1970s of Presley. The King of Rock 'n' Roll still retains some of his majesty but there is hesitation and vulnerability in his voice and posture that hint at his imminent demise. In motifs such as the falling star and the views of Graceland Sasnal captures the uncertainty of life in a damaged universe.

MARIA LASSNIG, the grande dame of Austrian art, was born in Carinthia in 1919 and now lives and works in Vienna. She is one of the most significant and innovative painters on the contemporary art scene. Since the early 1950s, her works have appeared in solo exhibitions, including at the Kunstmuseum in Düsseldorf (1985), the Stedelijk Museum in Amsterdam (1994), the Centre Pompidou in Paris (1995), the Kunsthaus in Zurich (2003) and at Hauser & Wirth in London (2004).

After studying at the Vienna Fine Arts Academy, she spent some time living in Paris and New York. From 1970 to 1972 she studied film animation at the New York School of Visual Arts. On returning to Vienna in 1980, she became the first woman professor of painting in the German-speaking countries, holding the chair in this discipline at Vienna University of Applied Arts. She participated in the Venice Biennale that same year. In 1982 and 1997 her work was displayed at the Documenta in Kassel.

MARIA LASSNIG's œuvre embraces not only painting, but sculpture, animated film and major graphic output. She had long kept her drawings under lock and key, and only published them in 1997 in 'Die Feder ist die Schwester des Pinsels’ [The pen is the sister of the paintbrush], published by Hans Ulrich Obrist. Her life's work has won her many accolades, including the Grand Austrian State Prize in 1988, the City of Zurich Roswitha Haftmann Prize, the Rubens Prize of the Town of Siegen, Germany, in 2002, the City of Frankfurt Max Beckmann Prize in 2004 and the Austrian Decoration for Science and Art in 2005.

At her current exhibition in Zurich, Hauser & Wirth present a group of works: recent, large-format oil paintings in which the artist portrays herself in various moods and physical states. But there is a common theme: observation of the physical presence of the body and what she calls bodily consciousness. The works come across to the observer directly and effectively, as this artist reveals herself intimately and unpretentiously.

"I step in front of the canvas naked, as it were. I have no set purpose, plan, model or photography. I let things happen. But I do have a starting-point, which has come from my realization that the only true reality are my feelings, played out within the confines of my body. They are physiological sensations: a feeling of pressure when I sit or lie down, feelings of tension and senses of spatial extent. These things are quite hard to depict."
So these are not conventional self-portraits. Rather, they visualize an engagement with the body's inner sense, as it comes across in her works 'Hospital' or 'Speaking grille'. Contrasting colouring and strong body shapes give the works a powerful, even drastic impact. Nevertheless, they reflect fragility. The body portrait 'You or I?' on the other hand works by positioning the body directly to face the observer and this challenging question. The effect is provocative, threatening but, at the same time, ironic and almost humorous.

"If I did not tell people that these are body pictures, they wouldn't know. In fact it is only a belief statement on my part that these pictures must be understood as bodily consciousness. I tell people that it is so, but they cannot see it. In true portrayals of bodily consciousness, they cannot see it. But it is important to me that people should know this, because I think it matters."