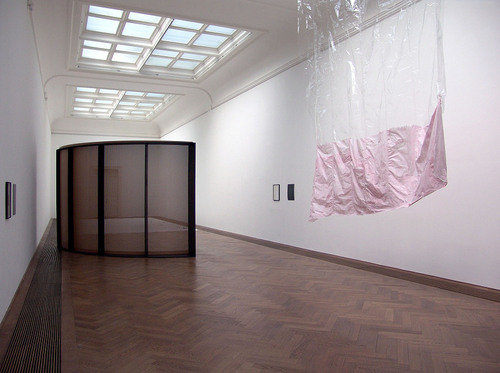 The exhibition POOR THING brings together works by eight international artists in the historic architectural setting of the Kunsthalle Basel. After an extensive renovation, completed in 2004, the original architectural character of the five spacious halls in which the exhibition is being held has been modified, yet is still clearly visible in the details of friezes and pilasters, as well as in the skylight structures. With their impressive appearance, white walls and top light, the halls are consistent with the model of a contemporary art space that emerged over the course of the 19th century and has been challenged by many artists in the 20th century. Each of the artists featured in POOR THING has reacted individually to this location: some have examined the existing architectural features or the historical context of the Kunsthalle, while others have transformed the space with large-scale interventions, objects or fragile, process-based sculptures that produce altered spatial perceptions.

The artists’ works reference the minimal and conceptual art of the 1960s and 70s, but in the indirect manner of a reformulation: they borrow motifs and appropriation strategies from minimal and conceptual art in order to find ways of articulating their response to the changed conditions of today’s society. The artists in this exhibition work with preference with simple, untreated and unstable materials, similar to those used, for example, by Robert Morris (felt) or Eva Hesse (string, rubber and latex) since the mid-1960s in their rejection of the permanent materials and industrial coolness of minimal art. For the artists featured in POOR THING, these commonplace, crude materials enable them to address personal themes and present their own observations on everyday life. They examine the sculptural qualities of the materials in a playful manner or work with everyday objects, which they remove from their familiar context by means of unusual presentations. Varying between abstraction and the representation of inanimate objects and anthropomorphic forms, as well as found objects, the works set up associative narratives and create new layers of meaning. In this way they are in a productive sense both ‘pure’ and ‘poor’.

The approach of Norwegian artist Knut Henrik Henriksen (*1970) is that of an improvising architect who underscores or alters existing spatial situations by means of sculptural interventions. At the Kunsthalle, Henriksen has made a construction of simple wooden slats that changes the shape of the large square room by covering its entire area at a height of 2.4 m – the standard ceiling height in Norway. Henriksen has mounted the uncut slats in their varying standard lengths together so that they form a narrow, jagged opening in the centre, through which the skylight of the existing room remains visible.

For her object, Swiss artist Karin Hueber (*1977) has carefully studied the ground plans of the Kunsthalle. These reappear on a smaller scale and in a tilted form in her sculptural object. Precariously positioned, the iron bars outline immaterial volumes in the space; the object is stabilised by a wall made of found wooden panels that have been varnished with glossy paint. Shaped like an impossible spatial solution, the elegant sculpture is attractive and at the same time awkward, prompting the viewer to think about the function and perception of familiar spatial structures.

Scottish artist Karla Black (*1972) works with raw materials such as powdered plaster and petroleum jelly, which she combines with materials that have clear female connotations, for example face powder, lipstick or skin cream. These materials not only reveal their cultural use and psychological significance, in Black’s fragile, process-oriented works they also confront a history of sculpture and painting dominated by the ‘great’ male artist and his epic battles with the material. At the Kunsthalle she is showing two new pieces: a floor piece made of plaster in powdered form and a fragile, suspended work made of transparent, gossamer-like cellophane.

Basel artist Kilian Rüthemann (*1979) explores the sculptural quality of everyday raw materials. Here he presents an approximately 4 m-long iron bar that seems to extend weightlessly into the space, along with a work made of asphaltic felt that folds like waves over the floor. Both works reveal Rüthemann’s interest in overcoming gravity and the relation between coincidence and artistic intervention.

German artist Dagmar Heppner (*1977), who lives in Basel, has created a spatial arrangement involving various media for the first elongated gallery space in the Kunsthalle. Besides drawings and photographs, it contains a curved wall made of perforated wooden panels. The wall distorts the usual perspective of the space and plays with varying degrees of visibility between closeness and distance, front and back view, spatial opening and restriction.

English artist Ian Kiaer (*1971) works with fragile materials such as cardboard, paper, cellophane and polystyrene. His multi-part installations of objects, drawings and watercolours are connected with complex narratives relating to the history of utopian architecture, literature and philosophy. Kiaer’s work for this exhibition focuses among other things on the initial period of the Kunsthalle building and on the changing agendas concerning the presentation of art since modernism.

Basel artist Martin Heldstab (*1971) deals with everyday objects such as wooden pallets or light bulbs, which he reworks by means of subtle shifts from their original functions. Here he presents among other works an installation of roof battens into which light bulbs have been inserted in a particular sequence. On the wall they create a rhythmic variation and at the same time evoke an abstract landscape.

American artist Robert Breer (*1926) is represented in the exhibition by his group of works entitled Floats. Since the 1950s, he has used the media of painting, animated film and sculpture to explore the experience of abstract forms in real time and space. The Floats – often abstract objects made of simple polystyrene – move subversively and freely around the space with the aid of unseen motors, disturbing the formerly secure territory of the exhibition space.

Despite the modest gestures with which the artists modify the space, they confidently inscribe themselves in the spatial context of the Kunsthalle and activate the viewer’s imagination by confronting him or her with new and surprising situations.

An exhibition brochure will be available containing texts and illustrations of the individual artists’ works.

On Tuesday, June 26, 2007 at 8 pm, a programme of films by Robert Breer will be screened at the Stadtkino Basel.

The exhibition is generously supported by: