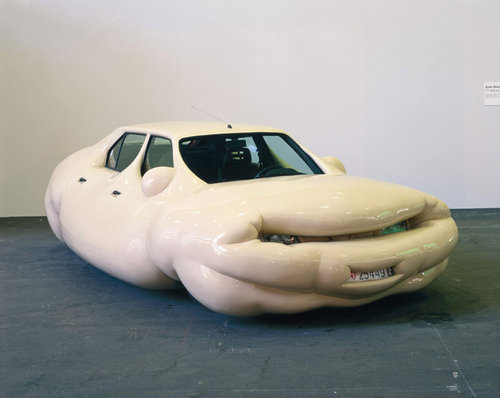 This exhibition is of an exceptional scope and has been conceived for the particular layout and space of the museum in Lyon. It contains more than one hundred artworks by this artist among which are unusual works such as Fat House (an astonishing small house that has become enormous as if suddenly inflated) from the West collection (USA), and also the very first Fat Car (a car deformed as if ready to explode), or even the amazing Truck (a lorry whose back end climbs the wall defying all the rules of gravity) made specially for the exhibition in Lyon.

Expressing his vision of the world with humour, by way of videos, sculptures, photographs or installations, Erwin Wurm exhibits his Instructions on How to be politically incorrect and also the One minute sculptures that have made him famous and which invite the visitor to try out sculpture for himself.

The "freaks", those surprising phenomena at fairgrounds, "monstrous" humans long regarded as "abnormal", were popularised by the eponymous film by Tod Browning (1932) and exhibited from the mid 19th to the early 20th century, particularly in the United States, at events called "Freak Shows".

If particular freaks (fakirs, contortionists, sword swallowers...) performed tricks or extraordinary feats most of them - dwarves, giants, Siamese twins, tattooed women or men, bearded ladies... - were merely themselves and confirmed this mainly through static shows where they stayed motionless, just staring straight at the public.

The showmen, the entertainers who presented them graced them with imaginary identities and told extraordinary tales of their lives. So if being tall is merely a physical attribute, then being a giant obviously implies much more.