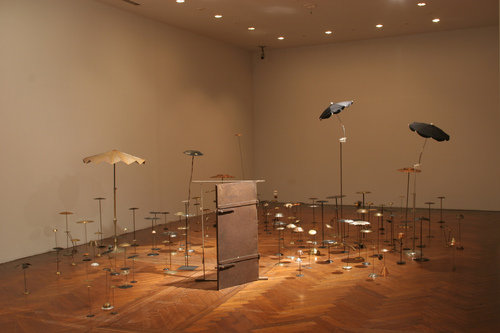 Art Scope DaimlerChrysler Japan is the name of a promotion program for young Japanese artists launched in 1991. In 2005, the award program was restructured to provide for an exchange of contemporary Japanese and German art.

The works of the four award winners in 2005 - Kohei Nawa and Hiroharu Mori from Japan, Katja Strunz and Georg Winter from Germany - were jointly presented in the fall of 2006, initially in the Hara Museum for Contemporary Art in Tokyo. For the second time after 2004, the works of the winners of the "Artist in Residence" award, a groundbreaking program for Japan, will also be shown in Haus Huth, Potsdamer Platz, Berlin. The exhibition comprises some 20 pictures, photographs, objects and installations part of which were specifically created for this project.

The cervus nippon yesoensis, or Hokkaido sika deer, is an Eastern Asian deer species that now occurs in many areas of the world. In Germany too, a wild population of sika deer has developed since the mid 20th century, from animals that have escaped or been resettled. But Kohei Nawa did not find the sample he is exhibiting in DaimlerChrysler Contemporary either in the Hokkaido area or in Germany.

Nawa starts his search with the well-known internet search engines, follows the electronic trail into online auction houses and finally acquires the desired item directly on screen - all on the World Wide Web. The artists then continues by covering the surface of his objects - from toys to shoes or musical instruments - completely with glass prisms and marbles. All the works created in this way for the so-called "PixCell" series do retain their original qualities, but they acquire a second skin - a "light envelope". In this way, Nawa shows his viewers to the particular qualities of the digital age and demonstrates how much the reality of things depends on perception.

All Kohei Nawa's works have a detectable tactile attraction inherent in them, as well as visual charm. Nawa's materials and techniques are always shaped by the particular forms of expression and material possibilities at the places where the artist is working. So the artist is broadening his scope for artistic expression in Berlin as well: he started to study the regularly changing graffiti outside his studio window and to compare them with the surface structure of his drawings as they emerged. Kohei Nawa took the awareness this gave him of his drawings' extraordinarily tactile component back to Japan with him. Nawa would like to become an artist who relates closely to locations, thoroughly familiar with the particular qualities of the world's great art cities.

Kohei Nawa was born in 1975 in Osaka in Japan. He lives and works in Kyoto.

Because he has spent so many years abroad, Hiroharu Mori has developed a sensitivity to intercultural differences and social interfaces. He discovers cultural and social 'abnormities' in this light, and then captures them successfully in his video works, usually bringing them out with some pointed humour.

Hiroharu Mori worked mainly in the medium of painting until the mid 1990s. Then, while studying in the USA, he started experimenting with simple video technology.

The video "After a Painting" reveals Mori's roots in that form: the apparently unchanging motif refers to Vermeer's 1658 "Milkmaid", using up-to-date video techniques to bring this painterly incarnation of 'stillness' into the present. All the features in the surrounding space are cut out. Mori concentrates instead on the only perceptible movement, pouring water, supported by the horizontal composition and his refined editing technique. The stillness and timelessness of the projected image draw an archetypal element out of this everyday action.

Mori conceived the video "Cheering for Art" on an Art Scope visit to Berlin. He observed the local art scene's practices on the spot, and was especially impressed by the apparent lack of inhibition shown by contemporary artists in Berlin, their enthusiasm and the excellent exhibition facilities at their disposal. This new background experience sharpened his view of the Japanese art world's idiosyncrasies when he returned to Japan. Mori engaged a group of student cheerleaders in Tokyo who agitated loudly about the merits of contemporary art in three rehearsed performances. The video tries to enthuse viewers about "the arts" in a strangely Japanese, almost military way, though behind all this is the element of "self-mockery" that is so deeply embedded in the Japanese mentality.

Hiroharu Mori, born in 1969, lives a works in Yokohoma, in the Kanagawa prefecture.

Summer flowers in a meadow, a wood full of mushrooms, or indeed a collection of Far Eastern percussion instruments - viewers can come up with a whole number of associations. Slowly and without noticing you are drawn into the artist's imagination, start reeling and forget yourself in the thicket of parasols. This idea of "invasion" by the viewer is one of the central themes of Katja Strunz's work. Her method is closely linked with the technique of "folding" that her well-known minimalist wall reliefs demonstrate in particular.

In "Einladung zur Angst", under the protection of the parasols, which have infolded as if in a dangerous situation, we are asked to find our way into the interface between concrete 'Gestalt' and abstraction. For Strunz, who is referring to Italo Calvino here, the abstract is light, immaterial and ideal - a weightless counterpart to the opaque density of this world. This eerie-seeming moment of letting to creates the temporal discontinuity that Katja Strunz's objects and installation try to capture, in order to unfold spatially again at the same mo-ment.

Katja Strunz, born in 1970, studied philosophy, art and graph-ics in Mainz and Karlsruhe. She lives and works in Berlin.

On Shrove Monday 153 years ago Robert Schumann jumped into the Rhine near Düsseldorf, intending to end his life. But his attempted suicide was a pitiful failure. Schumann, wearing only his dressing-gown, was pulled out of the water by some Rhine boatmen, who recognized him and then taken home in proces-sion by a band of onlookers.

Georg Winter, during his visit to Tokyo, used this existential situation in the famous composer's life as a means of address-ing the contradictions posed by the German Romantics' nature Utopieas and urban conditions in modern Japan. Winter devel-oped his "Clara Schumann Radio Station" in the course of his Far Eastern research project. The radio station is a poetic ex-periment intended to enable viewers to experience the misun-derstandings that can arise as a result of failing to understand language and feelings.

For over 15 years, Winter has been the managing director controlling the fortunes of Ukiyo Camera Systems. UCS is a devel-opment office for camera technology and new media, and at the same time the umbrella organization for the artist's complex of artistic activities. The term "Ukiyo" comes from the Japanese and Winter translates it with this sentence: paying attention to the moment overcomes sadness about time slipping away.

In this sense, the Clara Schumann Radio Station is a logical further development for his creative work: Winter has been using temporary experimental set-ups and field research programmes to examine a whole variety of expressions relating to quality and values in the production of art and culture. Three-dimensional actions and processes are condensed in his conceptions, and opened to cognitive experience by re-applying experience to their existential fundamentals, relating to insight and condi-tioned by the body. Winter has developed a broad range of instruments for this under the banner of Ukiyo Camera Systems - cameras, notebooks, mobile phones and TV cameras, and uses them to extend conventional understanding of media terms by adding fundamental questions relating to social interaction, sensual and motor activity, and the correspondence between words and actions.

Georg Winter was born in Biberach in the Black Forest in 1962 and studied at the Staatliche Kunsthochule in Stuttgart. He lives and works in Stuttgart and Budapest.

We present the ten architects or architecture practices and their major projects from the various South African provinces nominated for the DaimlerChrysler Award for South African Contemporary Architecture.

An special presentation is be devoted to the prizewinner, Heinrich Wolff, selected by an international jury from a presentation by the nominees in February 2007 in Pretoria.

The DaimlerChrysler Award for South African Culture, established to give young people working creatively in the field of culture their first international exposure, is being awarded for the seventh time since 1999.