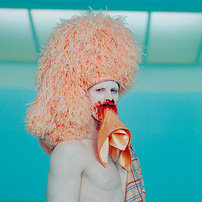 “Mythos” is the second exhibition of a two-part series dedicated to two fundamental sources of artistic practice – the object and the myth. Like the first exhibition “Re-Object,” “Mythos” also brings together one major historical position and three contemporary artists. With “Re-Object,” it was Marcel Duchamp whose selected works provided the thematic basis for the artistic strategies of Damien Hirst, Jeff Koons, and Gerhard Merz, whereas with the exhibition “Mythos,” which features work statements by Matthew Barney, Douglas Gordon, and Cy Twombly, Joseph Beuys will be assuming this role.

The idea of the myth extends the world of a rationally comprehensible reality into the supernatural and superhuman realm. Packed into this idea are wishes, premonitions, and destinies. Beuys has created a work in which, through the transformation of materials, forces, and energies, mythical experiences are elevated again to the status of the main source of artistic creation and of life altogether.

The exhibition “Mythos” allots each artist one floor of the KUB, letting him present large-scale work series. Each of the four shows is like a solo exhibition and has the character of a concisely formulated work statement.
The crux of the works shown at the Kunsthaus Bregenz is the death theme. Joseph Beuys’s work “Straßenbahnhaltestelle” (Tramstop), which the artist originally created as an installation for the main room of the German pavilion at the Venice Biennial in 1976, unfolds as a mythical image of memory, suffering, and recognition.

Running through Douglas Gordon’s work is an underlying mythic-tragic mood of the personal dichotomy of man in the face of his other, dark self. Gordon’s new work created especially for the exhibition, which features a reworked human skull, becomes a symbol of the dichotomy in the face of death at the border between immortal art and the transience of human existence.

All elements in Matthew Barney’s work, such as drawings, films, and objects, interact together like great sculptural systems. Their coded narrative fundamental structure is based on the interweaving of different mythical sources of various cultures. His large-scale sculpture “Cetacea” (2005), which is being shown for the first time in Europe, is no exception.

With a sweeping gesture, Cy Twombly has brought mythology, literature, and history together in his work in the poetic flow of the scriptural painted act. In his art, the idea of passage, the image of the ship and of the journey as a transforming transition between life and death all play a central role. This context also surfaces in the famous cycle of paintings “Lepanto,” which Twombly created as his contribution for the Venice Biennial in 2001.