Photography and engineering 1846-2006. Comprising 345 historical and contemporary photographic works by a total of 164 photographers, the exhibition illustrates the diversity of man's technical and industrial inventiveness. The works in the exhibition are arranged around the theme of the forces of nature and man's endeavours to tame and utilize those forces. 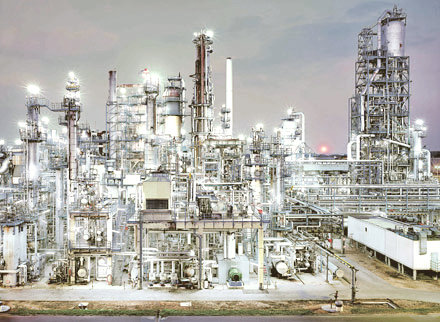 The subject matter of most exhibitions is restricted to a single period, country or artist. It is unusual for an exhibition to have a universal theme, providing insight into a very broad historical phenomenon, but the Centre for Fine Arts's new exhibition does just that. INGENUITY, referring to man's talent and natural ingenuity, explores the broad spectrum of our primeval engineering intelligence, which is directed at harnessing the unbridled forces of nature and channelling them into useable forces for the common good.
Industry has undergone expansive growth over the centuries: from mastering fire and the invention of the wheel in prehistory, through mechanics, chemistry and electricity during the first industrial revolution, to today's information technology, genetics, atomic energy, space travel and so on and so forth. In the twenty-first century the different types of industry are legion.

Comprising 345 historical and contemporary photographic works by a total of 164 photographers, the exhibition illustrates the diversity of man's technical and industrial inventiveness.

The works in the INGENUITY exhibition are arranged around the theme of the forces of nature and man's endeavours to tame and utilize those forces. They are also seen as the manifestation of the four elements which Empedocles maintained make up all matter: earth, water, air and fire.

The exhibition examines the different types of engineering from the perspective of their roots in one of the four elements. They include: mining, civil engineering and mechanics (mines, buildings, roads, railway lines, cars, etc.) which have their origin in the earthly; hydraulic engineering (dams, canals, etc.) which relate to water; metallurgy, chemistry and nuclear engineering which have to do with fire, and air and space travel (balloons, aeroplanes, spacecraft) which have to do with air. These areas are also cross-referenced. For example, a bridge spans both earth and water and there is a correlation between atomic energy, the bomb and the sun.
Furthermore, the exhibition looks at the impact of all forms of engineering on individual lives and on the organization of communities.

All-embracing it may be, but ingenuity is not the only subject of this exhibition. The artefacts of human ingenuity are illustrated by means of photography, itself a technological product of the first industrial revolution and a notable expression of human ingenuity. In our increasingly mechanized world, photography is the mechanization of the art of viewing. Thanks to the tenacious fieldwork of a number of now celebrated photographers from all over the world, we have inherited marvellous images of both the overpowering forces of nature and man's most ingenious human constructions.