The exhibition, a major retrospective, surveys the artist's rich and diverse oeuvre, presenting familiar works alongside rarely-seen ones and focusing on his two-dimensional work, particularly painting, from the 1950s to the present day. At the core of the exhibition, the author's fascination with popular culture, including music, film and sports. 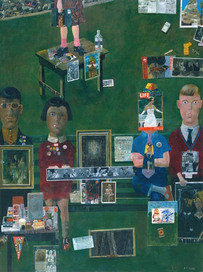 Tate Liverpool will present a major retrospective exhibition of paintings by Peter Blake, the largest since his Tate Gallery exhibition in 1983. A highly influential and original artist, Blake is often described as the godfather of British Pop art. The Tate Liverpool exhibition will survey his rich and diverse oeuvre, presenting familiar works alongside other rarely-seen ones. This exhibition will focus on Blake’s two-dimensional work and in particular painting, from the 1950s to the present day. The show will include major iconic works such as On the Balcony (1955-57), Self-Portrait with Badges (1961), The Toy Shop (1962), The Beatles (1963-68) and ‘The Meeting’ or ‘Have a Nice Day, Mr Hockney’ (1981-83). It will conclude with recent works, such as the Marcel Duchamp World Tour, a project which has occupied the artist for the last decade.

At the core of Blake’s work has been his fascination with popular culture, including music, film and sports. A prolific artist, he has worked in a variety of media including painting, drawing, printmaking, illustration, collage and sculpture. During the late 1950s and early 1960s Blake became one of the best-known British Pop artists. He defined a specifically British pop aesthetic and, has on several occasions, seamlessly blended his work with popular culture itself, the best known examples being his cover for the Beatles album Sergeant Pepper’s Lonely Hearts Club Band and the recent cover design for Stop the Clocks by Oasis.

In 1969 Blake moved to Avon favouring, albeit temporarily, a rural over an urban setting for his studio. Although at times frustrated by the solitude of country living, Blake’s new setting fuelled a change of direction in his work, together with an interest in the Victorian imagination, fairies and the idealised vision of eternal childhood. In 1975 he co-founded the Brotherhood of Ruralists, a small group of artists whose paintings combined a fascination in the elements of nature with musical and literary influences.

Blake returned to London in 1979 shortly before visiting Los Angeles, a trip that had a profound impact upon him and inspired several new paintings, some of which were included in a specially decorated room in the 1983 Tate retrospective. Two such paintings, ‘The Meeting’ or ‘Have a Nice Day Mr Hockney’ 1981-3 and A Remembered Moment in Venice, California 1981-3 demonstrated his exceptional skills as a realist painter. Throughout the 1980s and 90s he continued to pursue his interests in contemporary popular culture and completed numerous portraits of stars from the worlds of music and film.

The major Pop Art exhibition at the Royal Academy in 1991 bought him back into public consciousness and introduced his work to a new generation of British artists including Damien Hirst and Tracey Emin. Emin herself appears in Marcel Duchamp’s World Tour: Playing Chess with Tracey from the series of paintings based on Blake’s belief that wherever Duchamp stops (even posthumously) he has a profound effect upon the artworld. In 2000, Peter Blake curated the exhibition About Collage at Tate Liverpool which drew on his own, and Tate’s, collections to reveal the radical and far-reaching impact of collage on 20th-century art.