From reality to dreams 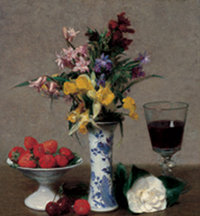 From reality to dreams

For the first time in Switzerland the Fondation de l’Hermitage will be highlighting the French painter Henri Fantin-Latour, surely among the most talented artists of the latter half of the 19th century, between the traditional and the modern. With such a clearly independent style, Fantin-Latour is difficult to classify in the artistic panorama of his day. Although disassociating himself from the realistic painting popular with mid-century artists, such as Courbet in particular whose student he was for a time, he eventually aspired to the same goal as his contemporaries the Impressionists, striving to create a way of “painting light”, atmospherically, where the formal aspect played a more important role than the motif. However, he did not find inspiration for his compositions in natural surroundings, outdoors, but preferred working in the intimacy of his Parisian studio.

Still lives and portraits
Although best known for his still lives, Fantin-Latour was also an excellent portraitist. He managed to express the emotional life of bourgeois society in a strangely disturbing way: the stifling straitjacket of morality and convention, the affective indifference and the absence of communication. Without deliberately trying to appear critical of his contemporaries, the painter soberly, objectively and phlegmatically transcribed what he saw and chose to portray static figures against bare backgrounds, with no explanatory ornaments or accessories, thus giving his portraits an air of still lives. Fantin-Latour also endeavoured to show things as they really were in his still lives. The viewer can easily recognize flowers or fruit, all the more clearly because, just like his figures, they generally have a neutral backdrop. Fantin-Latour is certainly one of the most remarkable still life painters in the history of western art. His compositions are always organized to create a feeling of total harmony. His creative mastery is so great that he can easily bear comparison with his model Chardin.

Giving free rein to the imagination
Apart from still lives and portraits, Fantin was also fond of a third genre of painting that he himself described as “subjects of the imagination”. Inspired by his first artistic idol Delacroix, he devoted himself to the representation of mythological and religious subjects for the rest of his life and more particularly towards the end. Often inspired by music, especially Wagner, these scenes are conceived in a very different and much freer style than the portraits and still lives, at times recalling Gustave Moreau. Discussing his creations, Fantin would readily affirm that he dreamt of absolute painting, quite the opposite of the still lives and portraits, which had “nothing to do with anything in life”. With the evocative symbolism of these unusual pictures, Fantin-Latour created vibrant art to illustrate the spirit of music.


An impressive display of lenders
Designed by the Fondation de l’Hermitage and presented exclusively in Switzerland, this retrospective will include a comprehensive, top-level selection of over a hundred works underlining all the facets of Fantin-Latour’s art, and bring together pastels, drawings and lithographs, in addition to the many paintings. A historical and biographical section as well as numerous original visual documents will also be displayed. A major catalogue with colour reproductions of all the works presented in the exhibition will be published on this occasion. The works come from important French national collections such as the Musée d’Orsay and the Petit Palais in Paris, the Musée de Grenoble, the Musées des Beaux-arts in Bordeaux, Lyon, Pau and Tournai, the Palais des Beaux-Arts in Lille, as well as from the United Kingdom, with loans from the Bowes Museum at Barnard Castle, the Fitzwilliam Museum in Cambridge, the Tate and the National Gallery in London and the Manchester Art Gallery. Other prestigious institutions such as the National Gallery of Art in Washington in the United States, the Art Gallery of Hamilton in Canada, the Kunstmuseum in Basel, the Kunsthaus in Zurich, the Göteborg Museum of Art and the Staatliche Kunsthalle in Karlsruhe, as well as many private collectors guarantee an exceptional selection and a very high standard of works.