Science Fiction and other worlds 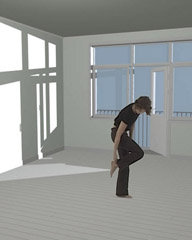 Science Fiction and other worlds

Astrup Fearnley Museum of Modern Art has in recent years presented a series of exhibitions with younger Norwegian artists. This year we have the pleasure of presenting Ann Lislegaard (b. 1962).

Ann Lislegaard's artistic media are architecture, sound, video, installation, drawing and photography. Her works deal with the experience of time and space, and open up for alternative readings of our environment. In simple but concentrated spatial installations, Lislegaard challenges viewers' visual references and ability to orient themselves. Through sound and light, she creates a consciousness of pictures seen only with the mind's eye, and conjures forth different images and other possibilities for orientation. Language -- as speech, text and sound -- is an important factor in her art. One could say that through works touching on both the cognitive and perceptual world of experience, she explores language as a physical entity.

Some of Lislegaard's works invite us into a cinematic or virtual space in which uncomplicated means such as spatial displacement, the combination of traditional film and animation, or the interplay between light and shadow, capture us in an almost meditative experience. Although often constructed in simple ways, these works contain striking aesthetic qualities. Lislegaard moves about in a digital landscape, exploring the possibilities of her media in order to create alternative experiences of place. In the new works Crystal World (after J.G. Ballard) and Bellona (after Samuel r. Delany), viewers are invited to enter a fascinating cinematic room in which they encounter monumental digital animations. It is science-fiction literature's ability to create alternative places that fascinates Lislegaard and functions as a backdrop for some of her best works.

Ann Lislegaard has, in the course of the last decade, distinguished herself as a significant international artist. She represented Denmark at the Venice Biennial in 2005, and has exhibited at prestigious institutions such as Kunsthalle Wien, Louisiana Museum of Modern Art, Musee d'Art Moderne de la Ville de Paris and Statens Museum for Kunst, Copenhagen. The exhibition Science Fiction and other worlds contains sound and light installations, drawings, photo and video works from the last ten years, and is presented in on the Museum's lower level. The exhibition is curated by Gunnar B. Kvaran, Hanne Beate Ueland and Grete Årbu, and organized in close collaboration with the artist. A catalogue with essays by Gunnar B. Kvaran, Lars Bang Larsen, Erik Granly Jensen, Bill Arning, Matthew Buckingham, Barbara Clausen and Simon Sheikh is available.