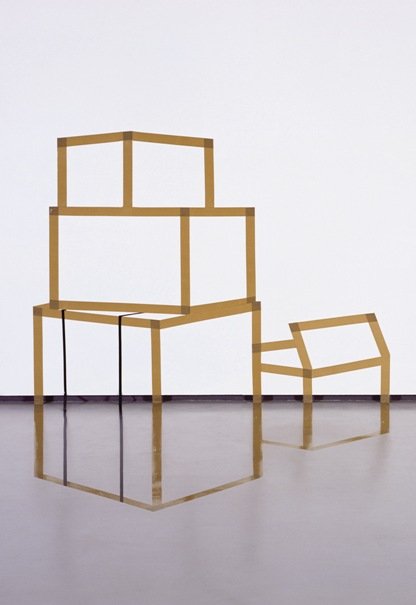 Igor Eskinja inclines towards a trend of visual art creators that follow a principle of minimalism and scantiness in their choice of materials and expression. His own works are characterized by the perfection of production. Since the end of the 1990s, and in various exhibition spaces, Eskinja has been authoring installations that were of temporary character. Minimally intervening by reduced means upon the wall or the gallery floor (applications made of adhesive tape, wall papers, stickers, dust...) he created spatial installations which lasted for as long as the actual exhibition. By using expendable materials and by temporariness of the exhibitions, he demystifies the status of the institutional space and attaches bigger importance to the process of the observer's perception, rather than to the existence of a permanent art object.

A figurative flat depiction has been conceived in order to problematize spatial relations, while activation of the observer's perception within a given and real space opens up a certain new spatial situation, a space within the space. The observer is demanded to visually read i.e. to locate, discern and decipher the data gained in a process of visual perception and reflection i.e. active relation.

Eskinja's interest is not exclusively focused on the problems of visual form, perception, spatial and symbolic redefining of the gallery space, but also on problematizing the complex communication relations within art world. In this manner he questions, often with a bit of irony, the intricate relations arising from the interaction between observer/consumer and artwork, the manners of artwork presentation and the meaning of gallery space's functioning.

Inside the exhibition space, he carefully creates a two- dimensional installation of an object, a sort of which can be found around us on everyday basis (boxes, waiting-rooms seats, a microphone, folders from a commuter screen...). A two-dimensional image (thanks to reflection and the outstanding knowledge of the laws of perception) is construed in such a way that an observer perceives it as the three-dimensional object. The next stage comprises photographing the object, after which the artist applies a state-of-the-art technology to produce a photo, subsequently placed beneath plexiglas. Eventually he exhibits the final product, a perfectly balanced art object which - to the observer's eye - constantly provokes a tension between charms of illusion, polysemy and simplicity. Actually, thanks to a skill of sophisticated perception, the observer will reveal and recognize artwork's multidimensionality. A possibility of arising of a communication relation between observer and artwork necessarily presumes the former's active participation.

Producing the work that has a character of durability can be interpreted as a progress in direction of surpassing the gallery space. This process can be regarded as the author's peculiar liberation from the givens and frameworks of an institutional space, and as a new phase of creation, moving into a new realm of the open possibilities.