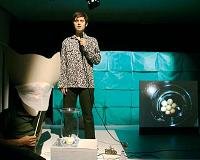 You see, there's a person, and she looks like a normal person, but if she opens her mouth, she only has one tooth growing out of all of her gums. So, from the upper gum, one tooth is coming down growing into the lower gum. So when she talks, her tongue is flicking around inside the mouth but the tooth is sound proof, so nobody hears.
- from Scary Stories, In the Room

Sung Hwan Kim and David Michael DiGregorio create a world bound together by stories, performing and singing a series of scenarios and drawings in something akin to opera. The exchange between the two artists engineers an understanding of the relationship between text and lyrics, image and sound, Korea and the US, iconophilia and iconoclasm - both the fetishisation and destruction of iconic symbols. A tale is told through text, music, film and live video, as Kim and DiGregorio, with musician Byungjun, perform in a new installation for Project Arts Centre. It is considered a major error in radio broadcasting when there is even five seconds' silence on air.

Pushing against the air, a concert with talking and images, is inspired by Byungjun's radio show, World Music Journal, broadcast nationwide in Korea from 2004 to 2005, and was performed on the opening nights. The music itself is made with layered voice, ocarina, delay, a sampling keyboard, harmonica, kazoo, pump organ, guitar, mallets, stretched membranous materials, air, dry-erase marker on plastic, jae-gum (Korean cymbals) and pang-eul (Korean bells). Sung Hwan Kim is a Korean artist based in Amsterdam and finalist in the Prix de Rome; David Michael DiGregorio is an Amsterdam-based US musician recording under the name of dogr.