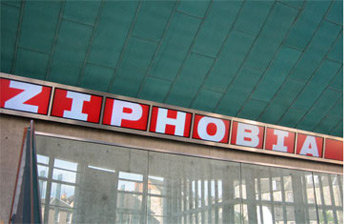 This summer, Horsecross presents Love and Fear (2007), a major new commission for Threshold artspace by the French artist Claude Closky, recipient of Le Prix Marcel Duchamp in 2005. Love and Fear has been acquired for the permanent collection of the recently opened Threshold artspace and is showing as part of a new group exhibition Body Language curated by Iliyana Nedkova.

Closky's new work Love and Fear brings a degree of intensity, absurdity and further satirical twist to his oeuvre. The qualities, which persist are Closky's ongoing affection for the primacy of the word in contemporary art, site-considered approach to place, and disarming bravado when exposing controversies in life. The romantic, love-hate relationship, involving simultaneous or alternating emotions of love and enmity, philia and phobia, silence and noise, is at the formal and contextual core of Love and Fear.

Love and Fear is premiered in the context of Body Language -- a new group exhibition which investigates how artists use the technique of 'people watching' to push the boundaries of the traditional genre of figurative painting. The new cinematic figuration defines studio portraits and choreographed performances, improvised documentaries and computer game characters. Invariably artists use the primal communication of body language employing gestures and postures; eyes and smiles; masques and tattoos, and even sounds and colours in their works.

About Threshold artspace and Horsecross
Threshold artspace launched in September 2005 to national acclaim in Perth, UK. It is home to Scotland's only permanent collection of digital art with 60 works acquired in less than 2 years. The artspace features a number of project spaces available for artists' interventions including an entrance box for interactive soundscapes; a 'canvas' of 22 flat screens dominating the artspace for multi-channel video art installations; an interactive playground for art games and live Internet art; a trail of sound boxes and sensors embedded in the floor and ceiling; an audiovisual treat in the public toilets; copper-clad roof for light artists. All Threshold artspace locations are linked together by an 'intelligent' software which allows artworks to be displayed through curated exhibitions and experienced 24 hours a day throughout the year.