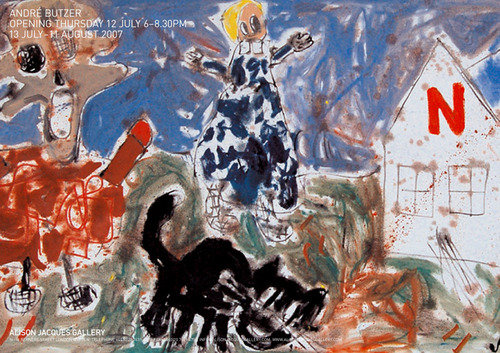 In the main gallery space, one painting variously depicts Munch-style screaming or happy smiling faces in heavily applied reds, blues, yellows and greens; another work is almost completely monochrome grey. A third work is as good as “abstract” (Untitled), posing the question of what continuity of motifs and impureness means in abstraction. Often the paint is smeared and dripped across the canvas creating abstract coalescing forms. Conglomerations and figure-like characters seem to emerge from splotches, strokes and curves in the paintings. Sometimes it is only possible to distinguish one figure from the next by a change in colour.

In his cartoonesque visions, Butzer has often been decontextualising fragments of American and German history. The painting “Erinnerung an Gottfried Feder (Nachricht vom Tode)” references Gottfried Feder, the German economist and member of the NSDAP who was Hitler’s mentor in finance and settlement politics. To Butzer Gottfried Feder is a fallen, meaningless figure. Here the duality of organic and machine forms is taken to the extreme in a dense composition. In the fourth painting “Untitled (mit N-Haus)”, illustrated on the exhibition invitation, some of Butzer’s signature motifs appear altogether. A cast of crudely drawn characters feature: a black-eyed man, a woman, a black cat, a smiling sun and the N-House. For Butzer, the letter N represents NASAHEIM, an imagined place between Anaheim (the city district of Walt Disney’s first Disneyland) and outer space. NASAHEIM (N) provides a context for many of Butzer’s paintings, a field of utopia and a fictional destination for his painted dreams in space.

Flat layers of colour bordering on areas of partially unpainted canvas can also be seen on “Untitled (F.S.-Kinder)” shown in the second space of the gallery. Here in the smaller room large, colourful smiling M&M-like heads with enormous eyes appear to be floating weightless in space. By cutting the body away and allowing his figurative elements to hang free, Butzer tackles the figure/space problem. These are abstract forms within a figurative representation, or the other way round.

At first, the two monochrome works appear to be less related to the colourful paintings. On closer examination however we see comparable cable-like structures connecting these works; tangles, tracks and paths stretch across the chaotic picture plane, a chaos referred to by Butzer as a cosmic landscape, blurb or material. Once again a Schande-face may appear, this time in a small monochrome finished by Butzer with his fingers.

“I paint networked versions of the great drama of the figure in space, an indestructible, essentially organic constellation exposed to extreme deformation. Depicting this deformation automatically generates new figurations, but it also generates a new form of abstraction, in the colloquial sense of that word”. André Butzer in conversation with Berthold Reiß, April 2006.

André Butzer was born in Stuttgart, Germany (1973), and lives in Rangsdorf near Berlin. In 1996 Butzer co-founded the Akademie Isotrop in Hamburg together with a group of around 25 other artists and authors. The initiators managed the school autonomously until 2000 and represented it in a number of national and international exhibitions. Butzer has since organised a small series of group “Kommando” shows around the world. Some of these shows took place in honour of FRIEDENS-SIEMENSE CO., Butzer’s personal organization dedicated to abstraction. Butzer’s recent solo shows include: Galerie Guido W.Baudach, Berlin; Galerie Max Hetzler, Berlin; and Patrick Painter Inc., Los Angeles. Forthcoming shows include a solo show at Metro Pictures, New York (2008).