Swallowing Black Maria. Seers over the past years has created an interrelated body of work consisting of photography, video, performance and installations. Her artistic output evolves around both an autobiographical and a biographical narrative, including films in documentary style in which different narrators account for the strange events of the artist's life. 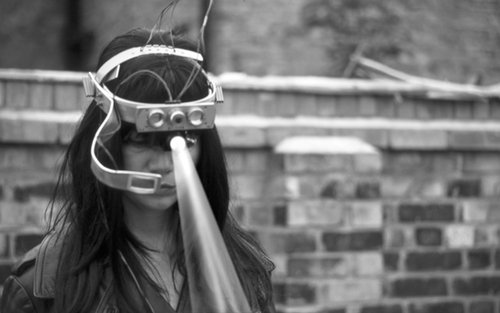 Swallowing Black Maria is a solo exhibition by London based artist Lindsay Seers who over the past years has created an interrelated body of work consisting of photography, video, performance and installations.

Her artistic output evolves around both an autobiographical and a biographical narrative, including films in documentary style in which different narrators account for the strange events of the artist´s life. We are told the story of a young Lindsay Seers who suffers from eidetic recall, “a perfection of memory so detailed and complete that her sense of past and present, of a difference between a world out there and the inner representation of that world, never emerged” (M. Anthony Penwill in Seers´ just released publication ´Human Camera´). She was therefore unable to speak until the age of seven, when she for the first time sees a photograph of herself and “her seamless unity with reality shattered”. Gaining the ability to speak, she loses the ability to form eidetic impressions, and starts photographing obsessively. The events subsequently lead the artist to turn her own body into a camera (her mouth the aperture and shutter), an involvement in ventriloquism, and her most recent attempt to become a projector.

Simultaneously Seers transcends what seems such a highly personal narrative by interweaving concepts of science, philosophy and photographic theory into the work, in an ongoing investigation into how cinematic and photographic technologies shape notions of identity and memory. By re-casting photography as an act that actually creates experiences rather than records them, or as David Burrows describes it in ´Human Camera´, by creating “an indexical process that is transformative”, the boundaries of photography and projection in Seers´ work are truly extended.

The exhibition at SMART Project Space includes recent films, new photographs and an installation created especially for the occasion. The installation is based on the Black Maria, the first-ever film studio where all the earliest shorts were filmed for the Edison Kinetoscope, beginning in 1894. Artist and curator Richard Grayson has contributed an essay on Seers´ work for the SMART Papers, the series of free publications accompanying each exhibition.

Linsay Seers´ live performances are the only occasions in which the artist speaks for herself delivering her own autobiography. These performances rely on real time, the expression of the live voice and the physical presence of the artist. These elements are used to counterpoise the construct of the third person narrative in the film works.