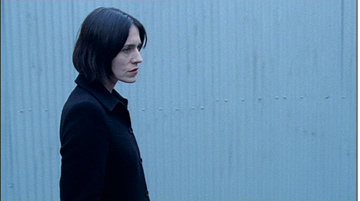 Born in Derry, Northern Ireland, in 1959, Willie Doherty is one of the best-known artists of his generation and has been chosen to represent his home country at the Venice Biennale this year. In order to do justice to the evolution of this impressive oeuvre, the Hamburg Kunstverein and the Lenbachhaus Munich have developed two different, complementary exhibitions that give a representative showing of the slide installations and videos from the start of Doherty's career in the early 1990s to the present day.

In his (often large-scale) single- and multi-channel videos, Willie Doherty offers political and aesthetic images of Ireland that challenge widespread misconceptions of pristine natural landscapes as well as biased coverage of the Northern Ireland conflict. The voice over in certain works, for instance, switches identity between offender and victim. Doherty's concern is not so much to tie down events and interpretations as to pinpoint archetypal features of the conflict. The traces of conflict that the videos capture--for instance deserted and wrecked buildings, or roadblocks--are also always viewed ambivalently, both as provocation for and as the consequence of actions. This shifting of perspectives and roles is in keeping with the reception that Doherty's often dualistically conceived works invite: perception of them is optimal when one moves around the exhibition space, directing attention at one of two screens then at the other.

Doherty's works have a remarkable ability to reach out beyond the specifically Northern Irish conflict and deal at a sophisticated level with general topics such as the surveillance of public space, mechanisms of inclusion and exclusion, and national and religious conflicts. While Doherty's stylistic devices are wide-ranging, all of his works share a high degree of suggestive visual invention and also the fascinating ambivalence of what at first sight appears to be unambiguous. A seemingly ominous figure, such as the man with shaved head in Non-Specific Threat (2004), for instance, whom the camera circles to the accompaniment of a voiceover, is both active and reactive, fictional and real, past and future. His words invoke situations ranging from menace to intimacy. The man could be a participant in the Northern Ireland conflict, or he could also be a plain human being--a worker, a student, a sportsman.

It is precisely this productive ambiguity that implicates the viewer at a level that is not only emotional but also intellectual, and reveals that those fears of possible violence and the paranoiac projections vis-á-vis the supposedly strange and unfamiliar are by no means confined to Northern Ireland.

Thursday, July 26, 2007, 7 pm: Presentation of the catalogue and lecture by Willie Doherty

The catalogue is published by Hatje Cantz with essays by Francis McKee and Matthias Mühling, an interview with the artist by Yilmaz Dziewior, and a videography documenting the filmic works from 1990-2007.

The Pearl River Delta is a construct of different administrative zones in the south of China. It is composed of the Guangdong province with its biggest city, Guangzhou (Canton), the "Special Economic Zone" Shenzhen, as well as the "Special Administration Regions" Hong Kong and Macao. These cities range from the "free" yet orderly city of Hong Kong to the Beijing controlled post-capitalistic/communist Guangzhou and are developing in different spaces and directions -- but gradually growing closer together, forming a giant mega-city.

A phenomena that is to be observed in many Asian regions, but in particular in the Pearl River Delta Region, is that a great amount of exhibition praxis is independent from the government and are self-organized. Such a pattern is founded out of the fact that there is a lack of governmental exhibition spaces and these groups form an important, tightly-knitted network for artistic production and exhibition.

As the power and the artistic strength of the region cannot be represented by an individual or a specific group, the Kunstverein in Hamburg presents an exhibition-cluster with different parts contributed by different established organizations and artists that are operating in that network: Para/Site Art Space from Hong Kong, Ox Warehouse from Macao or Vitamin Creative Space from Guangzhou, the media collective Videotage from Hong Kong or Alternative Archive, a film organization founded from the artists Cao Fei and Ou Ning in Guangzhou.