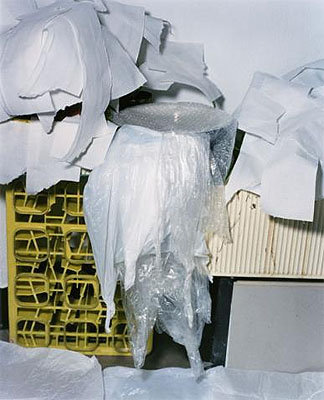 The starting point of Eva-Fiore Kovacovsky (1980, Bern) to the project 'The Factory' was to build landscapes, based upon the feelings of places and situations she misses from her place of origin, Switzerland. The factory refers to pictures as considered beautiful, pictures showing nature in an idealized way for example hills shining in the first spring sun, lakes as transparent as glass and forests covered with freshsnow. Pictures showing ideals. Beautiful but harmless, you could interpret them with a lot of depth, as the atmosphere of the places can be very intense, but they would never bother you with anything unpleasant. Kovacovsky is fascinated by how stere-otypical this ideas of landscapes are. We always compare what we see with what we know, it is how we learn and how we give things a name and place in our lives. Kovakovsky is interested in the role of "things" in our present context and what they remind us of. What happens if a certain arrangement allows us to start seeing something else in them? We have memories of how it was to be a kid, how we saw reality and how things which were not necessarily real could become a part of it.

Children are much more free in using what surrounds them in "wrong" ways. For them it is natural to use a shoe to be a boat and a orange to be the sun. Kovakovsky was interested in what would happen if she would build idealistic pictures of nature out of everyday objects. If she builds a waterfall out of cardboard and cut up plastic bags, wouldwe accept it as such? Kovakovsky was experimenting with abstract and illustrative ways ofshowing this illusions of nature. How far could she go? Can the viewer understand what she means if she just put some bottles and a plate on the floor? Would he see a lake on a wood side, or would he just see a still life? The connotations Kovakovsky built happened intuitively, inspired by objects as well as situations in landscape. Similar shape, colour, structure, size, or more subtle links were the connections.

All the landscapes were built in her house, her natural environment at the time. The house was the foundation, the furniture and architecture were the bases she build upon. The photographs alwaysshow some part of the house, like a floor or a wall, to give them a common identity and to put them in a context. The constructions themselves were ephemeral, they were con-stantly being improved, rebuilt, reorganized, relocated or destroyed - the used objects returned to their original function. Every arrangement was photographed. Kovakovsky has printed the still lives so big to create a situation like the viewer really stand in nature, in front of a tree or a waterfall. The photograph is not only a picture but a replica of reality. Due to the laser printing technique Kovakovsky uses, everything is treated with a high contrast that makes it almost hipper real. The whole denotation of the laser printer, as a technique of mass production, cheap and used mainly by companies attracted her. She has tiled A3 laser prints to make larger format pictures. Tilling the picture, and glueing it together by hand gives the work a fragility, a feeling you could take it apart any time, that it is ephemeral. It makes it a subject of discussion, that what you see is not what it is.