Love and loss: a video trilogy 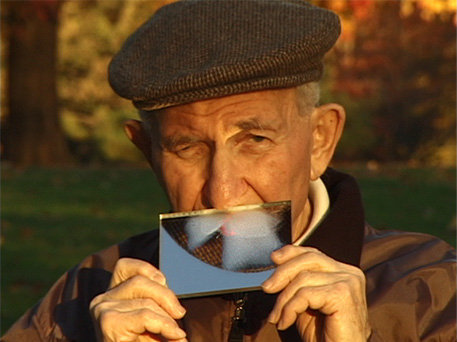 Love and loss: a video trilogy

The Jewish Museum will present Love and Loss: A Video Trilogy by Neil Goldberg from August 18 to October 12, 2007 in the Museum's Barbara and E. Robert Goodkind Media Center. Neil Goldberg's videos are personal yet detached, humorous and poignant reflections on aging, mourning, and death. He uses family members as willing subjects and agents in his conceptual art practice. In My Parents Read Dreams I've Had About Them (1998, 8 min.), Goldberg's mother and father recite humorous and surreal transcripts handed to them by the artist. With a sharp sense of wit, Goldberg uses his lens to broach difficult subjects such as fear of failure, familial rejection, and aging. In A System for Writing Thank You Notes (2001, 8 min.), the artist's widowed father explains his efficient method for acknowledging condolence cards and other expressions of sympathy.

The uncomfortably comical explanation demonstrates how order and dispassion are necessary tools in the grieving process. My Father Breathing Into a Mirror (2006, 1 min.) is an existential meditation featuring Goldberg's father (who passed away in 2007) in the foreground of an autumnal landscape. Neil Goldberg's work was included in The Jewish Museum's 1996 exhibition, Too Jewish? Challenging Traditional Identities, and has been shown in The New York Jewish Film Festival, co-presented by The Jewish Museum and the Film Society of Lincoln Center. His art has also been on view at The Aldrich Contemporary Art Museum, Berkeley Art Museum/Pacific Film Archive, The Hammer Museum The Kitchen, The New Museum of Contemporary Art, and The Wexner Center for the Arts. Goldberg's videos have been screened at the British Film Institute, the San Francisco International Film Festival, and Thirteen/WNET's Reel New York. His work is in the permanent collections of The Jewish Museum and The Museum of Modern Art. Neil Goldberg is represented by Sara Meltzer Gallery in New York.

Located on the third floor of The Jewish Museum, the Goodkind Media Center houses a digital library of radio and television programs from the Museum's National Jewish Archive of Broadcasting (NJAB). It also features a changing exhibition space dedicated to video and new media. Using computer workstations, visitors are able to search material by keyword and by categories such as art, comedy, drama, news, music, kids, Israel, and the Holocaust. About the National Jewish Archive of Broadcasting The National Jewish Archive of Broadcasting, founded in 1981 in association with the Charles H. Revson Foundation, is the largest and most comprehensive body of broadcast materials on 20th century Jewish culture in the United States. With a mission to collect, preserve and exhibit television and radio programs related to the Jewish experience, the NJAB is an important educational resource for critical examination of how Jews have been portrayed and portray themselves, and how the mass media has addressed issues of ethnicity and diversity. Its collection is comprised of 4,300 broadcast and cable television and radio programs.

About The Jewish Museum The Jewish Museum was established on January 20, 1904 when Judge Mayer Sulzberger donated 26 ceremonial art objects to The Jewish Theological Seminary of America as the core of a museum collection. Today, The Jewish Museum maintains an important collection of 25,000 objects - paintings, sculpture, works on paper, photographs, archaeological artifacts, ceremonial objects, and broadcast media. Widely admired for its exhibitions and educational programs that inspire people of all backgrounds, The Jewish Museum is the preeminent United States institution exploring the intersection of 4,000 years of art and Jewish culture.