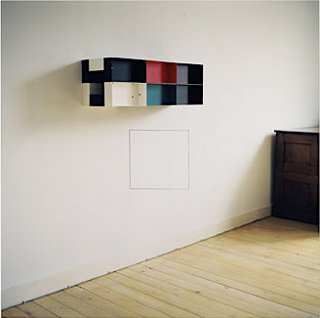 In 1969, Jan Dibbets created one of the touchstone works of conceptual art, titled Perspective Correction – a photograph of a wall in his studio on which a square has been drawn in pencil. In actuality, Dibbets drew a trapezoid on the wall, but in the photograph the oblique perspective of the point of view makes the figure appear to be a square.

Thirty-five years later, in 2004, Dibbets – who has never stopped exploring perceptual phenomena and applying them to architecture and landscape – created a new series based on his 1969 Perspective Correction. He selected works from his private collection by fellow artists Carl Andre, Donald Judd, Sol LeWitt, Robert Mangold and Robert Ryman, and photographed them in his studio with trapezoid/squares inscribed upon them with string. Ironically titled Perspective Collection, the series of 10 large-scale photographs is an homage to this era of minimal and conceptual art. This will be the first U.S. showing of this series.