Masterworks alongside works by the groundbreaking American artists he influenced 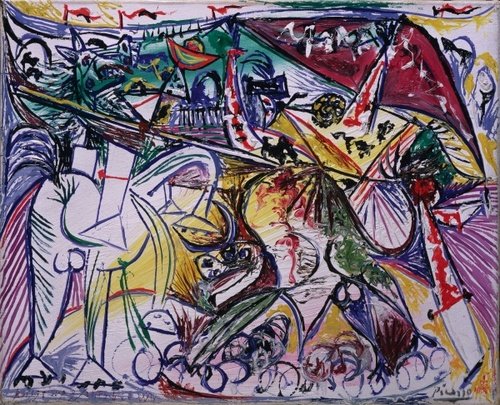 Picasso and American Art, a landmark exhibition organized by the Whitney Museum of American Art, New York, will be presented June 16–September 9 at the Walker Art Center, the first U.S. venue to host masterworks from Pablo Picasso’s private collection in 1980. Picasso and American Art examines the fundamental role that Picasso played in the development of American art over the past century by juxtaposing his work with that of groundbreaking American artists who were inspired or influenced by his example. The exhibition features nearly 30 works by Picasso as well as a wide-ranging display of works by nine American artists: Max Weber, Stuart Davis, Arshile Gorky, John Graham, Willem de Kooning, Jackson Pollock, David Smith, Roy Lichtenstein, and Jasper Johns. Each will be represented by approximately 10 artworks spanning their careers. In addition, works by Marsden Hartley, Man Ray, Louise Bourgeois, Jan Matulka, Robert Motherwell, Andy Warhol, and Claes Oldenburg, among others, will be on view. The selection of American artists was determined in part by the decision to focus only on artists who addressed Picasso’s art before his death in 1973. Picasso and American Art is curated by Michael FitzGerald, Associate Professor in the Department of Fine Arts at Trinity College, Connecticut, in association with Dana Miller, Associate Curator at the Whitney. The exhibition’s opening-weekend celebration features a Walker After Hours preview party on Friday, June 15, and an opening-day lecture by FitzGerald on Saturday, June 16. (A complete listing of related programs follows.)

Although Picasso never set foot in America, many of this country’s most important artists saw him as the central figure of modern art and defined their own achievements through their assimilation or refutation of his example. “The intense involvement of American artists with Picasso’s work was at the center of a fundamental transformation in American art during the 20th century,” said FitzGerald. Picasso and American Art places artworks by Picasso near related ones by Americans in order to allow visitors to see how artists here absorbed, critiqued, or occasionally rejected Picasso’s example as they created their own significant contributions to modern art.

The majority of the approximately 140 objects in the Walker’s presentation of the exhibition will be paintings and drawings. A small number of sculptures also will be featured. Among the Picasso works on view will be two from the Walker’s collection and two on loan from the Minneapolis Institute of Arts.

Works in Picasso and American Art that have never before been exhibited publicly in this country include Picasso’s Still Life (1908), Louise Bourgeois’ Untitled (1940) and Untitled (1941), Jasper Johns’ painting After Picasso (1998), as well as several drawings and studies that Johns is lending. Many of the essential Picassos are coming from foreign collections and will give U.S. audiences exposure to significant works that have not been seen in this country for decades. Among these are Picasso’s Bar-Table with Musical Instruments and Fruit Bowl (c. 1913), Still Life with Bunch of Grapes (1914), and Minotaur Moving (1936).

A few of the artworks by Picasso that are coming from overseas for the exhibition may be familiar to those who attended the Walker’s 1980 exhibition Picasso from the Musée Picasso, Paris, in which these works traveled to the United States for the first time. The popular exhibition consisted of over 150 artworks given by the Picasso estate to the French government in lieu of death duties. After leaving the Walker, many of the pieces were shown in New York City as part of Pablo Picasso: A Retrospective at the Museum of Modern Art. Works such as Head of Fernande (1909), Figure (1928), and The Shadow (1953) were featured in the 1980 exhibition.

A 400-page catalogue, co-published with Yale University Press, accompanies the exhibition. It includes a scholarly monograph by FitzGerald and approximately 300 illustrations as well as a thorough chronology that documents the accessibility of Picasso’s work in the United States through exhibitions, collections, and publications. Based on extensive research, the catalogue provides valuable new insights into the ways that Picasso’s art affected generations of American artists and the ways in which America helped shape Picasso’s reputation. Hardcover: $65 ($58.50 Walker members); softcover: $50 ($45).

Art on Call
Callers dialing 612.374.8200 any time day or night, inside or outside the Walker can access interviews with the exhibition curators as well as leading scholars of Picasso, David Smith, Jackson Pollock, and Jasper Johns. Information that’s accessed via Art on Call is also available to the public through the Walker’s Web site (newmedia.walkerart.org/aoc) as well as in Podcast versions which can be downloaded to an iPod or other MP3 player.

Known as the father of modern art, Pablo Picasso influenced generations of artists in the United States—without ever setting foot here. Imagine what he can do for a party. Join us in celebrating the opening of the exhibition at this special Walker After Hours. Featuring music by Digitata, cocktails, appetizers, a film screening, art activities, Pablo’s Party People Pictures, and a Target Lounge on the terraces, this evening is a masterpiece you won’t want to miss.

Walker After Hours sponsored by Target.