The exhibition looks at the nature of artistic practice in the post-Fordist era, defined by a global information economy and the corresponding remapping of labor, and also focuses on artists dealing with the social conditions and redefinitions of work implicit in this supposed emphasis on 'immaterial' production. Works by 20 artists, curated by Joao Ribas. In conjunction a film screenings, New works by Alois Godinat and for Contemporary Architecture an installation by realities:united. 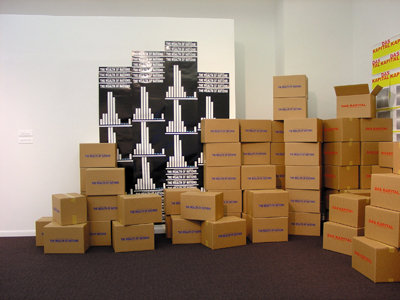 Chantal Akerman
FROM THE OTHER SIDE / DE L'AUTRE CÔTÉ
2002, 99 minutes. In English and Spanish with English subtitles.
The story is old as the hills, yet every day it continues to unfold, every day more terribly.
Sometimes poor people, in an attempt to survive, risk their lives and leave everything behind to live elsewhere. But they're not wanted elsewhere. And if they are wanted it's for their labor, to do jobs that no one wants to do. In FROM THE OTHER SIDE, elsewhere is the United States and the poor are mostly Mexicans. Renowned filmmaker Chantal Akerman shifts her focus between the border towns of Agua Prieta, Sonora, where people from all over Mexico wait in limbo before crossing over, and neighboring Douglas, Arizona, a town ringed by mountains and desert plains.

"A spare, painterly and scrupulously unsentimental look at the plight of illegal Mexican immigrants massed at the United States border. Both eerily beautiful and filled with a quiet compassion."–Dave Kehr, NEW YORK TIMES

This film is being screened in conjunction with the exhibition, NEW ECONOMY, curated by João Ribas at Artists Space from June 15 to July 28. NEW ECONOMY looks at the nature of artistic practice in the post-Fordist era, defined by a global information economy and the corresponding remapping of labor. The exhibition also focuses on artists dealing with the social conditions and redefinitions of work implicit in this supposed emphasis on 'immaterial' production.

Contemporary Architecture presents an minimalist installation by the Berlin-based architects and artists of realities:united. Two digits of 7-segment display—formed using industrial fluorescent tubes—are suspended from the ceiling. The installation is light sign, information carrier, and light source at the same time.

As a “display”, the installation is used to show the current time in minutes. At the same time –as light installation– it is the only light source inside the exhibition space and therefore it serves as the necessary pragmatic lighting source. While the displayed information is changing every minute, the over all light intensity is kept on a constant level during all times, thus the appearance of the exhibition space is changed subtly but constantly. “Below” realities:united contextualizes the installation above -- both conceptually and within their work.

realities:united prioritizes organization-as-design above elemental or ornamental design. In this sense the installation’s design is the idea rather than the object. The “normal” is connected and re-arranged in a manner which results in an effect greater than sum of its parts. The goal is not to beguile the viewer with shiny objects, rather it is to collect and organize the environment in a subtle, non-intrusive, yet fundamentally altering way. This effort ideally breathes some life into the ambient technology, perhaps even some playfulness, which hints at the potential without an overt aesthetic agenda, and with an incorporative attitude towards content.
For more information visit: http://www.realU.de

Support for New Economy was received from Étant Donnés.

Support for New Works was received from CAMPARI and Pro Helvetia.