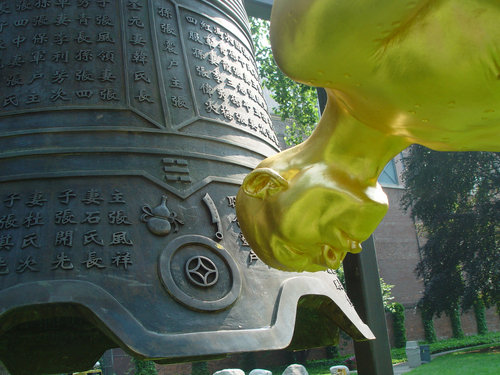 WORKS BY FOUR HIGHLY REGARDED CHINESE ARTISTS EXPLORE ISSUES OF SPIRITUALITY AND IDENTITY IN RELATION TO THE PAST.

An exhibition of contemporary Chinese art, utilizing both outdoor and indoor spaces at The Newark Museum, showcases ten works by four of the most prominent artists working in China today.

The Quiet Gesture: Recent Chinese Art, currently on view for a limited time through September 7, 2007, includes ten works by artists Zhang Huan, Wang Jin, Lu Shengzhong and Zhan Wang, each of whom rose to prominence in China and internationally in the last decade of the 20th century.

The highly unusual installation at the Museum takes full advantage of the beautiful Alice Ransom Dreyfuss Memorial Garden as a setting for four major sculptural installations. In addition, six works are exhibited in and around the Museum's central Engelhard Court. Generous funding for the exhibition has been provided by Abel and Sophia Sheng, Johnson &Johnson and The Wallace Foundation.

"The four featured artists," said Curator of Modern and Contemporary Art Beth Venn, "share a common interest in exploring China's rich cultural past and its relevance to contemporary ideas and expressions about spirituality, reflection and history. These artists have turned inward, looking to explore issues of the self and one’s identity in relation to the past."

"Because this work is intended to evoke contemplation," explained Museum Director Mary Sue Sweeney Price, "it requires a setting that permits each visitor the space and opportunity to examine, appreciate and share personal moments with each artistic work. The Museum's Dreyfuss Memorial Garden, Engelhard Court and surrounding promenade present a rare opportunity for Newark Museum visitors to fully appreciate The Quiet Gesture."

Four sculptures are installed in the Dreyfuss Memorial Garden adjacent to the Museum: People's Republic of China Passport No. 125109 by Wang Jin; Ornamental Stone by Zhan Wang; Mother and Son by Lu Shengzhong, and Peace by Zhang Huan.

Passport is a series of eight hollowed out rocks, each approximately four feet in diameter, into which the artist has carved a self portrait. Each rock was carved as a quiet protest against eight denials of the artist’s requests for visas.

Zhang Huan's Peace is a large-scale sculptural installation consisting of a bronze bell engraved with names of his ancestors and a gold-gilded cast of the artist's body hung from a simple framework. In the work's original configuration, visitors were invited to push the gilded cast of the artist’s body into the bell, thereby forcing a symbolic confrontation between him and his ancestral past.

Personal reflection is also the theme of Ornamental Stone by Zhan Wang. Chinese culture has long valued unusually shaped, natural stones that have come to be known as "scholars' rocks" used for spiritual reflection. In Zhan Wang's interpretation, molded of malleable stainless steel, the concept of reflection is also taken literally.

Artist Lu Shengzhong's work is dominated by a signature motif that he calls "Little Red Figure." The artist first developed this sprightly figure with outstretched arms and legs when he studied the paper-cutting techniques used extensively in the folk art found in rural areas of China. A large steel sculpture of the figure is installed in the Museum's garden. Additional works from the artist's Human Bricks series--in which his "Little Red Figure" is repeated scores of times in paper and affixed to plexiglas with silk thread--are exhibited inside.

Another creation of Zhang Huan in the exhibition is Dragonfly, a series of five large-scale silkscreen panels which depict the artist submerging himself in water while large, colorful dragonflies dance above his head.

About The Newark Museum
The Newark Museum is located at 49 Washington Street in the Downtown/Arts District of Newark, New Jersey, just 3 blocks from NJPAC and 10 miles west of New York City. The Museum is open all year round: Wednesdays through Fridays, from Noon - 5:00 p.m.; Saturdays and Sundays, from 10:00 a.m. – 5:00 p.m., October 1 – June 30; and Saturdays and Sundays, from Noon – 5:00 p.m., July 1 – September 30. Members are admitted free. The Museum Café is open for lunches Wednesday through Sunday. Convenient parking is available for a fee. For general information, call 973-596-6550

The Newark Museum, a not-for-profit museum of art, science and education, receives operating support from the City of Newark, the State of New Jersey, the New Jersey State Council on the Arts/Department of State and corporate, foundation and individual donors. Funds for acquisitions and activities other than operations are provided by members and other contributors.