Lapsus Exposure is one of Coleman's most important slide projection installations: large projected images are presented in a darkened space with synchronised audio narration, incorporating the use of image dissolves, and series of tableaux-vivants are interspersed with panoramic and dissolving views of a production set, suggesting the location of a film or fashion shoot. 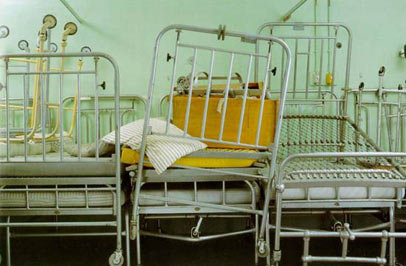 The first showing in Ireland of one of the most important works by the internationally-acclaimed Irish artist James Coleman opens to the public at the Irish Museum of Modern Art on Friday 27 July 2007. The slide installation, Lapsus Exposure, 1992-94, is one of a trilogy of pioneering works by Coleman from the 1990s, acquired by IMMA through funding from the Heritage Committee of the National Cultural Institutions in 2004. The work will be shown in the Great Hall at IMMA, following the successful showing of the first part of the trilogy, I N I T I A L S, 1993-94 in the Great Hall in 2006. The final work in the trilogy, Background, 1991-94, will be shown in 2008.

James Coleman is widely regarded as having a uniquely influential role in a range of media that dominate large areas of current art practice. For more than 30 years he has used the photograph, the projected film still, the transparency, the slide show with sound track and the film as powerful means of conveying his reflections on the meaning of the image, whether moving or static. The importance of the medium itself, and its role in shaping our understanding of what we see, is a key concern in Coleman’s work, with the technical equipment for his slide works regularly installed inside the exhibition space.Communication, subjectivity and the use of media are central concerns in Lapsus Exposure, 1992-94, and in the other works in the trilogy – I N I T I A L S, 1993-94 and Background, 1991-94.

Lapsus Exposure, 1992-94, is one of Coleman’s most important slide projection installations, for which Coleman is widely recognised. Large projected images are presented in a darkened space with synchronised audio narration, incorporating the use of image dissolves. In Lapsus Exposure, 1992-94, a series of tableaux-vivants are interspersed with panoramic and dissolving views of a production set, suggesting the location of a film or fashion shoot. The characters appear to be musicians, in both contemporary and recent historical costume, with production personnel and equipment also present, as though a mise-en-scène is being staged. The relationship between past and present is also evidenced by the non-linear narrative of the voiceover, which suggests allusions to recorded and live performance, and allegories of analogue and digital photography.

Uncertainty is introduced through the variety of different genres in which the artist chooses to present the images, from popular television soap opera, documentary and film. Lynne Cooke in a recent essay on Coleman’s work describes the process whereby “weaving references drawn from film, from drama and from painting, Coleman situates his trilogy in a hybrid realm, one that allows him to comment obliquely on these canonical art forms and their traditions without, however, fully subscribing to any.” As with many of Coleman’s works, the viewer is free to move in the space and find their own vantage point, in relation to the architectural space.

Commenting on the forthcoming exhibition of Lapsus Exposure and on what the acquisition of the trilogy means to IMMA, the Museum’s Director, Enrique Juncosa, said, “We are very happy to present this second work of the trilogy of slide projected works by James Coleman that IMMA acquired through the Heritage Fund in 2004. These works from the 1990s were fundamental in building up his international reputation. They are also one of the core pieces of the IMMA Collection. The trilogy belongs to the tradition of experimentation with language initiated by James Joyce and Samuel Beckett. The impact of James Coleman’s influence can be seen in the work of a new generation of artists, including Douglas Gordon, Liam Gillick, Steve McQueen, Jaki Irvine or Gerard Byrne, for whom he is an unquestionable master. The presentation of this work coincides with the participation of James Coleman in the documenta 12 exhibition in Kassel, where again he is one of the core artists in the show.”

James Coleman was born in Ballaghaderreen, Co Roscommon, in 1941. By the mid-60s Coleman had already begun creating works using photography and video, and later developed a number of live performed works in Ireland, Portugal and Holland. Since the 1970s, Coleman has exhibited extensively in international museum and galleries, including the Dia Center for the Arts, New York (1994-95), Kunstmuseum Luzern, Lucern (1995), Centre Georges Pompidou, Paris (1996), Fundació Antoni Tàpies, Barcelona (1999), Kunstbau Lenbachhaus, Munich (2002), Sprengel Museum, Hannover (2002), and Museu do Chiado, Lisbon (2004-05). In 2003, Coleman developed a unique project at the Louvre in Paris for the exhibition Léonard de Vinci: dessins et manuscrits. Coleman has also participated in many international group exhibitions.