My Life With Nam June Paik. 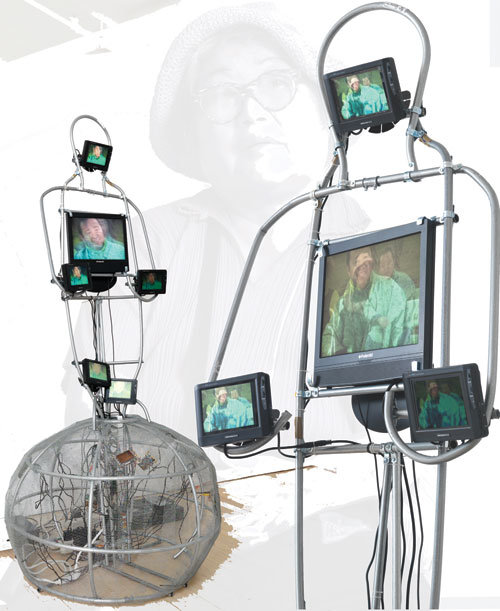 My Life With Nam June Paik

Maya Stendhal Gallery is pleased to present a solo show of pioneering video sculptor and multimedia artist Shigeko Kubota titled My Life With Nam June Paik, which runs from September 6 through October 20, 2007. As one of the first artists to explore the aesthetic, emotive, and technological properties of video, Kubota is largely responsible for video's acceptance as a legitimate art form. Her early video sculptures and performances broke new ground for women artists during the feminist art movement of the late 1960's and 1970's. On view are key works, some never before exhibited, which disclose Kubota's important contributions to contemporary art practice. At the same time, these works highlight the artist's special relationship with husband and collaborator Nam June Paik (1932-2006).

The autobiographical is a constant theme throughout Kubota's impressive body of work. She unites traditional sculpture with the electronic image to convey the personal, spiritual, and creative aspects that motivate her in life and in art.

Conceived of as one video environment, the exhibition presents a landscape of Kubota's magical video sculptures, which at once disorients and transfixes the viewer. It is a dreamland filled with massive crystalline mirror growths, dynamic metal sculptures, and video screen projections that pulsate colorfully like living organisms. Kubota describes the sculptures as a means of communication with another world.

Jonas Mekas, Kubota's longtime friend and collaborator, encapsulates the essence of this monumental show: "So it's time that we see Shigeko Kubota as an artist, a supreme artist in the art she was so crucial in assisting. Her video/electronic sculptures have been so rarely seen in public. Their modernity, their energy, their impact upon one's entire sensory and mental body is electrifying. I can only try to imagine, and it's not so easy to do, Shigeko Kubota's contribution to her life's friend, Nam June Paik. It must have been immense."

The show presents two new, larger than life sculptures that will be unveiled to the public for the first time. Nam June Paik I (2007) assumes a ghost-like form. Composed of metal piping, the work abstractly suggests a human figure sitting on a mesh, orb-like base. The figure comes to life as recent images of Kubota and Paik in Miami play on monitors stationed at the head, torso, hands, and knees. A beautiful musical piece that Paik composed when he was thirteen emanates from the work, lending an otherworldly air to this eccentric and surprising environment. The imposing Buddha-like figure of Nam June Paik II (2007) stretches out his arms, claiming control over this video underworld. He is Paik reincarnated "simultaneously wearing suspenders and a belt to indicate the eccentric personality for which he was known. In one hand he holds a violin, the instrument he smashed in his memorable performance One for Violin Solo. In the other hand is a Buddha head, referencing his well-known work TV-Buddha. One senses that the connection between Kubota and Paik remains strong as ever with this piece. Touching footage of the couple shot over the years plays on 15 monitors placed throughout the torso, arms, and head. Created in memory of Paik, these intimate works symbolize his enduring presence as a husband and artist.

Born in 1937 in Niigata, Japan, Shigeko Kubota studied sculpture in her native country before moving to New York City in 1964 where she met George Maciunas, the influential founder of the Fluxus art movement. She became an active figure, embracing the movement's collaborative and experimental approach to artistic practice. Fluxus introduced her to one of the group's core members Nam June Paik, and they eventually married in 1977. The radical ideas and iconic imagery put forth by artist Marcel Duchamp also motivated Kubota in theory and practice. These influences, grounded in avant-garde beliefs, provided Kubota with the creative push needed to break free from art's restrictive boundaries, and in 1970, she began using video.