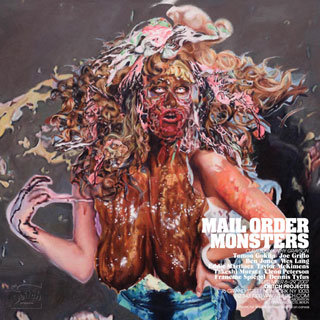 Deitch Projects presents a group exhibition curated by Kathy Grayson exploring new trends in fucked-up figuration. Every generation has its unique take on the figure and the most exciting new art seems to portray the figure as broken, decaying, fractured, and monstrous! Each artist in this exhibition exemplifies this pervasive tendency in a unique way: Francine Spiegel’s soupy, sloppy women protrude from and are engulfed by pop slime piles. Rapper’s girlfriends, socialites, and pin-up girls are all thrown into the stew of mylar, goo, glitter, and chewing gum. Their glammy/gory juxtaposition, coupled with the analog and digital moments of her distortions, presents an interesting visual conundrum of seduction and repulsion to these primordial females.

Dennis Tyfus’ work comes out of graffiti and underground art and music in Europe and America. The monsters that inhabit his hectic drawings are rude, humiliating, drunk and aggressive. Their central concern is bare survival, and in their strange jungle-like existence they attack and dominate. Having interesting affinities with graphic styles of Providence, Rhode Island but distinctions all his own, Dennis comes from Antwerp where he is a vibrant part of the underground music and art scene. Ben Jones, a member of east-coast art collective Paper Rad, takes neon and comic to new oddities of meaning. With the hand style of the best graffiti artist and the conceptual rigour of a dada-ist, his paintings, sculptures, and comics take a fresh look at figuration with their subtleties of form and make you think about a face in new ways.

Tomoo Gokita favours creepily still portraits of women and wrestlers executed exclusively in black and white. These faces occasionally escape his brush unscathed, but more often are tangled into knots, unearthed by abstract machine-like forms, or obliterated in one big gesture. With the existential angst of a Bacon sousrature but the pop-comic chicanery of a gifted graphic artist, his portraits are more than silly; less than tortured. Eddie Martinez loves men in hats, potted plants, parrots, and patterns. Drawing with paint, and often hastily, he configures ambiguous scenes of interaction played out equally between barely-held together figures and the inanimate objects that decorate their interiors. Wes Lang’s monsters come from the cultural detritus of a very fucked-up America. He takes images pushed under the cultural carpet and forces them back into view to be countenanced. He often takes on Native American art, black Americana, the Civil War era, or pornography in his exploration of the deleted scenes of American history.

Taylor McKimens’ monsters are not terribly other-worldly or fantastical but are rather the folks next door, down the street, or on the wrong side of the tracks. Deadbeats and derelicts roam sparse, harshly lit worlds of soggy bread and Band-Aids, bologna and knotted garden hose. The palette is a dulled Fixin’s Bar of mustardy yellows, graying tomatoes, and limpid greens. Taylor has a predilection for the entropic—splatters, drips, tangles, messes and decay, rust and ruin—all the corners where disorder begins to reclaim our fabricated environment and our bodies. No one is smiling and everyone is somehow sweaty. In this exhibition, his two saggy lumps come from a series he made called ‘The Drips’ who seem to trade in poo and live where everything has many, many crotches. Joe Grillo is a member of Virginia Beach art collective Dearraindrop and has been putting the figure through the pop media shredder for years with very hyperreal results. Visiting a Dearraindrop show is like being flushed down reality into a black-lit day-glo aquarium of decanted cultural precipitate and psychotic acid ooze. Myths, symbols and cartoons take on a life of their own with the horror of basic concepts in meltdown. Winking, jabbering, and hieroglyphic, Joe’s horror vacui paintings and drawings are an uneasy dream squeezed full of monsters and American archetypes.

Takeshi Murata’s videos are seething masses of data distortion and fractured figuration. Humans, monkeys, and monsters slog through and come apart in a beautiful complex pattern of disrupted video. By hacking the way a computer reads a DVD, Takeshi is able to painstakingly create frame by frame an image of both painterly abstraction and technological fragmentation. He has recently exhibited at Pace Gallery, Ratio 3, The Museum of Modern Art in New York, and The Hirschorn Museum in DC. Cleon Peterson is an LA-based graphic artist and painter whose included piece is a multi-panel installation of obscure but anxiety-ridden scenes of anonymous death and violence. He has shown at New Image Art in Los Angeles. This first version of this exhibition took place at Peres Projects, Berlin this summer. A full-colour catalogue will be available documenting both exhibitions.