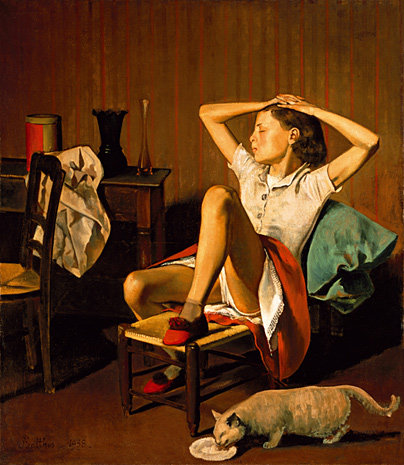 From 18 August to 4 November 2007 Museum Ludwig will be presenting the first-ever solo exhibition of the French painter Balthus (Balthasar Klossowski, 29.02.1908-18.02.2001) in Germany. On show will be around 70 outstanding paintings and drawings from the years 1932 to 1960, on loan from international public and private collections.

Balthus was known throughout his life as something of an oddity and exception who stood apart from his own times. After a childhood in Paris, a series of moves necessitated by the First World War -- first to Berlin and then Switzerland, followed by stays in France, North Africa and Italy -- all contributed to his outsider status. His exceptional paintings, featuring motifs inspired no less by storybooks, fairy tales and the masters of the Renaissance than by a provocative eroticism, resist categorisation under any of the contemporary art movements.

Balthus created his major works over the years from the 1930s to the 1960s while living in Paris and Chassy. The beginning of this period was marked by the scandal occasioned by his first exhibition in 1934 at Galerie Pierre in Paris. He presented a series of large canvases such as La Rue (The Street), La Leçon de guitare (The Guitar Lesson) or La Fenêtre (The Window), all depicting traditional motifs that are, as such, fairly innocuous. But the pointed eroticism in his paintings caused shock and consternation, just as Balthus had intended.

Over the following decades Balthus portrayed his contemporaries, painted landscapes and streetscapes, and returned time and again to young girls on the threshold of adulthood. Although during this period abstract and surrealist painting was at its zenith, Balthus cast his figurative motifs in a "timeless realism", as he termed it. The influence of the Italian Quattrocento and French classicism, as well as his adoption of the painting techniques of the old masters, gave him a singular position within the contemporary art scene. And yet his works were greatly admired by his contemporaries, such as Alberto Giacometti, Antonin Artaud, Paul Éluard and Albert Camus.

Balthus had a number of ties to Germany through his friends and relations. His parents, who originated from Silesia (now in Poland) were German citizens, and at times the poet Rainer-Maria Rilke acted like a godfather to him. Yet despite this closeness to German culture, Balthus’ works are not to be found in any of the public collections in Germany, nor has he ever had a solo exhibition here. The exhibition has been organised in collaboration with Dr. Sabine Rewald, a Balthus expert and curator at the Metropolitan Museum of Art, and been made possible by generous loans from international private and public collections, not least the Metropolitan Museum and the Museum of Modern Art in New York, the Art Institute in Chicago, and the Musée national d'art moderne in Paris.

The exhibition will be accompanied by the book Balthus -- Time Suspended. Paintings and Drawings 1932 -- 1960 by Sabine Rewald, with a text by Virginie Monnier, published by Museum Ludwig and Schirmer/Mosel, Munich, 2007.