For this exhibition, Bedford introduces a bold new series of portraits of early 20th century escape artist Harry Houdini. These life-size works, based on iconic photographs, compliment the adventure of death found in his previous shipwreck series. 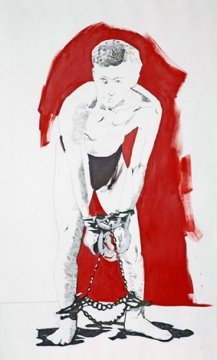 This intimate and powerful show continues Bedford's concerns with heroic myths and acts of bravado. Known for her stimulating paint handling and vitality of line, this new work contains the artist's stylistic virtuosity within two main topics: portraits of Harry Houdini and maritime disasters.

For this exhibition, Whitney Bedford introduces a bold new series of portraits of early 20th century escape artist Harry Houdini. These life-size works, based on iconic photographs, compliment the "adventure of death" found in Bedford's previous shipwreck series. Here, however, the possibility of death is condensed into this enigmatic persona who enraptured audiences with dangerous feats and uncompromising artistry during a tumultuous time in our country's history. Always conscious of contemporary politics, artistic struggle, and a fascination for biography, Bedford's timely investigation into Houdini reflects the existence of a new audience for fatalistic showmanship and self-made celebrity, especially as a metaphor for an artist's career within the art world.T

he Houdini portraits go beyond metaphor and into the physical embodiment of the concept of "escape." Painted on unprimed paper with oil paint and unstable inks, these works will eventually "tempt their own fate" by slowly disappearing over time, furthering Bedford's ideas of art as magic. As Bedford describes it, "to make the paint 'act' as it were, and to use the image as a prop to the materiality of the work. This idea of the image as a prop, or a base, is prevalent in most of my work, in which I then use the paint to deconstruct or re-imagine."

In addition to the Houdini works, Bedford continues her exploration of classic shipwreck images in contemporary painting. These beautifully violent paintings validate the psychic continuity between mythic seagoing adventures and the act of painting, describing content inherent in both: the energy and drive towards unknown landfalls. On view in this exhibition is a single, impressive oil on panel diptych, Untitled Shipwreck (Amor Ate O Fim), 2007.

Whitney Bedford received her MFA from UCLA in 2003. She has had solo exhibitions in New York, Paris and Los Angeles. Recent group exhibitions include Monica de Cardenas in Milan, Sommer Contemporary in Tel Aviv and the Museum of Contemporary Art, Denver. Her work has garnered reviews in ArtReview, ArtNews, Flashart and The Los Angeles Times.

The opening reception is Friday, September 21 from 6-9pm.