Mapping Tokio. Photography. The works transport the viewer to places distinguished in the first place by a fascinating strangeness. Strange, because they are black-and-white portrayals of a reality that jars with the everyday. 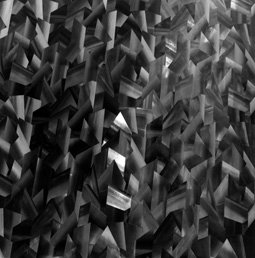 At Open Art 2007 we are showing new works by Frauke Eigen. The works by Frauke Eigen transport the viewer to places distinguished in the first place by a fascinating strangeness. Strange, because they are black-and-white portrayals of a reality that jars with the everyday. Strange, also, because inherent in her photographs is a minimalist aesthetics and at the same time an emotionality that is hard to grasp - qualities which perhaps are usually sought in painting, rather than in supposedly technically cold photography.

On her journeys to Afghanistan, Bosnia, Los Angeles and Japan, the artist confronts these alien worlds with her own feelings of structure. The new works that have arisen in Japan thus speak of the elegant reduction predominant in Japanese culture as well as of the legendary imperfection, symbolized by the crack in the tea-bowl that makes it timelessly beautiful. Contingency coagulates into a universally valid form.

The photographs are characterized by a precise sureness which reads off the beauty and simplicity of formal structures from the surfaces of walls, facades, tree-plantings. Light and its very special form of manifestation in black-and-white (what is black-and-white light?) become the guiding thread for a special viewing angle for holding onto an image at the precise moment when she makes her decision. These are places and objects which Frauke Eigen captures with her camera, whether it be in the early grey of morning, or in the first few minutes following rain, before a dark, light-absorbing lattice wall or before a single, bumptious bamboo shoot. Looking ahead she inkles the effect of the developed image, already feels the print in its size and tactile materiality, even though at first only the light has been caught by the film.

The power of adding a separate reality to visible reality which, however, is really nothing other than this reality itself, is perhaps part of the magic of photography and these images.

Frauke Eigen was born in 1969, studied at Bournemouth College and graduated from the Royal College of Art in London.