Salcedo's work functions as political and mental archaeology, using domestic materials charged with significance and suffused with meanings accumulated over years of use in everyday life. In her ongoing series of furniture sculptures she alters found wooden objects such as beds, chairs and wardrobes, transforming them into sculptures that take on the resonance of something lost, broken or mended. 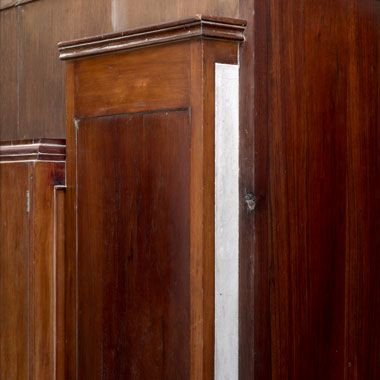 White Cube Hoxton Square is pleased to present an exhibition of sculpture by Colombian artist Doris Salcedo. A distilled survey of important sculptures made between 1989 and 2007, the exhibition has been organised to complement Salcedo's installation at Tate Modern's Turbine Hall.

Salcedo's work functions as political and mental archaeology, using domestic materials charged with significance and suffused with meanings accumulated over years of use in everyday life. In his catalogue essay, Rod Mengham describes Salcedo's work as a 'junction point, a crossing place for different objects, forms and meanings'. Salcedo often takes specific historical events as her point of departure, conveying burdens and conflicts with precise and economical means.

In her ongoing series of furniture sculptures - eleven, including three new works, will be exhibited at White Cube - Salcedo alters found wooden objects such as beds, chairs and wardrobes, transforming them into sculptures that take on the resonance of something lost, broken or mended. Apertures are closed in - what were once drawers or glass doors are now filled with fragments of clothes and concrete - as if the objects were suffocating or suffering from an act of violence as things are forced unexpectedly, brutally together. They bring to mind loss as much as survival and, like emergency architecture, evoke a sense of making-do, a desperate reconfiguration of fragments to enable one to keep going.

In her Atrabiliarios works, four of which are installed here, Salcedo places objects, gathered from people affected by Colombia's fraught political history, in niches behind a skein of taught cow bladder that is then sutured closed. This placement turns the objects into immediate relics to create a way to commemorate their past as everyday, domestic objects. Salcedo often undertakes months of research before making a work in order to find a subject that can be directly linked to a particular incident - such as Noviembre 6 y 7, which she staged in Bogotá - or a motif alludes to a more general history of oppression and tragedy.

During the past few years, Salcedo's work has become increasingly installation-based, using both gallery spaces and outside locations to create vertiginous environments charged with politics and history. Noviembre 6 y 7 (2002) was a commemoration of the seventeenth anniversary of the violent seizing of the Supreme Court, Bogotá on 6 and 7 November, 1985. Salcedo sited the work in the new Palace of Justice where, over the course of 53 hours (the duration of the siege), wooden chairs were slowly lowered against the façade of the building from different points on its roof, creating "an act of memory" in order to re-inhabit this space of forgetting. In 2003, in Istanbul, she made an installation on an unremarkable street comprising 1,600 wooden chairs stacked precariously in the space between two buildings. In 2004, in London at White Cube, Salecedo created Neither, an extraordinarily charged yet discreet installation where a sharpened wire fence seemed to have been embedded into the very walls of the gallery. More recently, in 2005, at the Castello di Rivoli, Turin, Salecdo re-worked one of the institution's major rooms by extending the majestic, vaulted brick ceiling of the gallery. The installation subtly transformed the existing space, evoking thoughts of incarceration and entombment.

A fully illustrated catalogue, with an essay by Rod Mengham, will accompany the exhibition.