Objects for imaginative and real use. The artists engaged in minimalist, reduced aesthetics - from Josef Albers' time as a lecturer at the Bauhaus in the 1920s through to contemporary positions, from Franz Erhard Walther and Heimo Zobernig through to Andrea Zittel and Leonor Antunes - have always worked on the transfer of their rigorous artistic concepts to the applied arts. Approaching the theme from the perspective of the collection's history, the exhibition aims at encouraging a dialogue between the developments in the areas as an open dialogue. 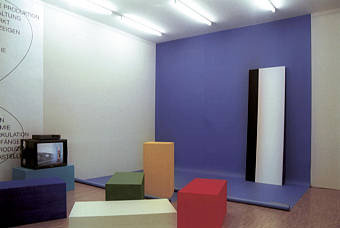 Objects for imaginative and real use

The artists engaged in minimalist, reduced aesthetics - from Josef Albers' time as a lecturer at the Bauhaus in the 1920s through to contemporary positions, from Franz Erhard Walther and Heimo Zobernig through to Andrea Zittel and Leonor Antunes - have always worked on the transfer of their rigorous artistic concepts to the applied arts.

These 'transfers' can be practically applicable but might as well just ask for an imaginative, associative and playful 'use'.

Approaching the theme from the perspective of the collection's history, the exhibition aims at encouraging a dialogue between the developments in the areas as an open dialogue.


Few 20th century objects other than Gerrit Rietveld's Rot-blauer Lehnstuhl (Red-Blue Armchair) dating from 1918-23 have so permeated our consciousness that the view we take of them determines our assessment of a thing's 'value' - usefulness? beauty? functionality ? or: furniture? sculpture? three-dimensional image? The rational form and primary color scheme of Rietveld's original combined with the Utopian view that removing the boundaries between works of art and items for everyday use revealed a vision for the ideal design of the world around us. Anyone sitting down in the Armchair was 'released' from the senseless pragmatism of industrial society, instead being 'elevated' into a world postulating the congruency of beauty, usefulness and humanity.

Two of the younger artists in our Minimalism and Applied exhibition take Rietveld as their starting-point for relocating - one could also say: earthing - Rietveld's Utopia for our day. Nic Hess's reconstruction of the Rot-blauer Lehnstuhl gives it a majestically high back and fixes it to the floor with tapes. Richard Merkle's Wandstühle (Wall Chairs), like Rietveld's chair, make the functional elements visually intelligible by allotting them colors, but at the same time shift pure functionality towards a minimalistic pictorial language.

Seats as objects that can possess both useful and aesthetic elements are one characteristic of the exhibition. First of all we have two 20th century classics, Max Bill's/Hans Gugelot's 1954 Ulmer Hocker (Ulm Stool), and two chairs designed by Donald Judd in 1987. But the show also includes an outstanding contemporary designer, Konstantin Grcic, using his black upholstered chair called Chaos (1999): Georg Winter has given the Grcic chair a bolster and provider users of the ensemble with a monitor as a medium for contemplative thought.

Three artistic approaches - Zobernig, Zittel, Shirayama - address coming to terms with American Minimal Art in the 1960s. Zobernig's eight colored plastic foam cubes, originally designed for his UTV Fernsehstudio (UTV Television Studio), can be positioned in the space like a minimalist sculpture by Robert Morris, but when placed on one side they produce an unconventional seating landscape. Andrea Zittel's A-Z Pit Bed, tailor-made for the collection in 2001, is an equally unmistakable and irresistible invitation to sit down, read, talk. Zittel has moved Judd's Minimal furniture further towards the present day. Ultimately the most recent reference to Minimal Art - to John McCracken in this case - leans against the wall in the form of the beer bench with luminous color accents by Meg Shirayama, born in London in 1980.

The names of Bill and Judd have already identified the presence of classical artists in the Minimalism and Applied field. They are joined by the artists Stankowski, Arakawa, Libermann and Albers, designers Noguchi and Krenchel, and the architect Renzo Piano, whose designs connect up with his master plan for Potsdamer Platz. We are showing one of Bill's reduced linear pictures, as well as applied objects.

Anton Stankowski, who first revolutionized graphic design from Zurich around 1930 and then from Stuttgart until his death in 1998, but was also always present as an artist, is introduced pars pro toto with his famous logo for the Deutsche Bank, and also as a painter. Stankowski's long-term studio partner Karl Duschek also made his name as a graphic artist as much as a concrete artist.

Shusako Arakawa, who moved from Japan to New York in 1961, is present with pictures from his 1960s conceptual-minimalist phase, alongside his visionary architectural designs, which he worked on with Madeline Gins from about 1970. Franz Erhard Walther is another artist who has made an impact with significant buildings as well as his action-related sculptures. Alexander Libermann moved between 'Minimal' and 'Applied' even in 1950s New York, producing large sculptures and paintings, but created the corporate image for American Vogue at the same time. Isami Noguchi's biography links him to Japan and the USA. His rice-paper lamps are part of 20th century design iconography. The bowls designed by the Danish engineer Herbert Krenchel in 1953 are less familiar, but no less influential on the styling of post-war crockery's new look, and for contemporary design as well.

1953 is also the year in which another 20th century design classic came into the world: Charles Eames designed his Hang it All wardrobe specifically for children. Its brightly-colored spheres are intended to inspire very small children to tidy up. The young Berlin designer and artist Ruby Anemic translated something small into something much too big in 2007: his wardrobe is now 2 metres wide, and can be supplied to individual color requirements. A set of colors borrowed from Imi Knoebel's coolly colored 1990 Grace Kelly painting (V-3) were chosen for the DaimlerChrysler Collection. The proportions of the monochrome color areas in Knoebel's Grace Kelly series were the model in their turn for Richard Merkle's wall chairs.

"Objects for imaginative and real use": our exhibition subtitle takes us to a set of works that address the imagination above all: these include a picture by the New York artist Sylvain Lionni that interprets a stadium graphic intended as a seating plan as an abstract pattern; the aggressive and dominant 'wool spider's web' by the Los Angeles based artist Krysten Cunningham; the young New York artist Danica Phelps's drawn diary codes; the minimalistic architecture adaptation, connecting up with Fred Sandback, by the Portuguese artist Leonor Antunes. They are all arguing on the basis of floating transitions: useful? beautiful? functional? Or: furniture? sculpture? three-dimensional architectural image?