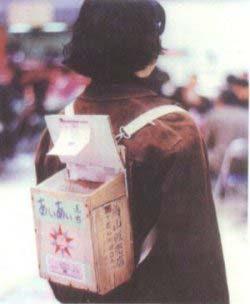 Cambridge Galleries presents "Big In Japan," an exhibition of six contemporary Japanese artists born in the late-60s and early-70s, who are now reaching international attention.

"Big In Japan" has been curated by Catherine Osborne who spent eight weeks in Japan last winter on a fellowship granted by the Japan Foundation. "Japanese adult culture is avidly unadult," Osborne writes. "It is stuck on a continual quest for instant gratification and blatant adorableness. It's not fixated on youth, like us, it's fixated on childhood."

Risa Sato's Campaign No. 8 (1999) comments on the adult desire for innocence with a multi-component sculpture that includes six functioning tricycles with sperm-like heads. Similarly, Takahiro Fujiwara's Beans-BALLOONs (1999) speak of another kind of desire for regression. Fujiwara's Beans-BALLOONs are two enormous pink and blue plastic inflatable jellybeans that you can crawl inside.

The experience of consumer culture figures in the work of Osaka-based photographer Yuki Kimura, whose Tobacco #3, Enemies Big & Small (1999) is a billboard-size image of the back of a girl's head and two packs of Lucky Strike, a popular brand of American cigarettes.

Hiroyuki Matsukage's Star (2000) is a super-karaoke installation that triggers immediate adulation from an ecstatic audience the moment a viewer sings into the mic. The ego gratification of Star is contrasted with the anonymity of video artist Saki Satom's work. Her 3-minute video loops draw our attention to the lack of individuality within a city teeming with office workers and department store shoppers. In her videos, you barely notice her performance interventions taking place at train stations during rush hour.

Artist Tsuyoshi Ozawa's Ai Ai Gallery (1994-ongoing) is a portable gallery worn as a backpack. The small scale of this work comments on instant gratification and the proportional relevance of art in today's culture. To see Ai Ai Gallery, viewers must call the backpack-wearing dealer by phone to arrange a private viewing and meeting point.

"Big and Japan" provocatively satirizes consumer culture, urban living, instant gratification, speed, crowds, shopping, sex, desire, fame, anonymity, and excess -- all conditions that are rampant in a metropolis like Tokyo, one of the richest, most densely populated cities in the world.

After Cambridge, the exhibition will tour to Montreal's Liane and Danny Taran Gallery at the Saidye Bronfman Centre for the Arts (January 17 - March 10, 2002) and later to the Gendai Gallery of the Japanese Canadian Cultural Centre, in Toronto, (April 1 - May 30, 2002).

This exhibition has been supported by the Japan-Canada Fund of the Canada Council for the Arts, the Japan Foundation Fellowship Program and Toyota Canada Inc.

About the Curator, Catherine Osborne... The years 1989 to 1994 were years of fantastic prosperity and economic expansion in Japan, a period that has since come to be known as the "bubble economy, " so-called because of the frenzy of stock market and real estate speculation that created what Carl Taro Greenfield called, "the greatest concentration of wealth in the history of the world." Catherine Osborne, lived in Tokyo from 1989 to 1994, where she worked as a visual arts writer for the magazine Tokyo Journal, and for the English national newspaper The Daily Yomiuri. She witnessed the swift escalation of cultural boosterism: "Museums were being built everywhere, tycoons were making glamorous art purchases, and private collections grew at a rate that would be considered impressive even for a mid-size museum." Living in Japan as an art writer so helped Osborne to gain a deep understanding of the climate in which much of the art in Tokyo had been made.

Catherine Osborne returned to Toronto in 1995 to work as an independent writer and critic and eventually, co-founder of the highly successful art zine Lola. This past winter she returned to Japan, on a Japan Foundation fellowship, to observe current developments in contemporary Japanese art and to organize the exhibition of current work for Cambridge Galleries.

Osborne returned to a Japan different from the one she left in 1994. The "bubble economy" had burst, leaving the country in a severe economic malaise. However, she observed that the cultural apparatus, built up during the years of prosperity, remained, with the new museums seeking global reputations and curators who were far more experienced in international art. Japanese artists, Osborne notes, are attuned now to the international art scene not as outside observers but active participants. They are better travelled, they often speak English and understand, for the most part implicitly, their position on the contemporary art scene as shifting from the first exhibitions of the 1980s which provided the Western world with overview introductions, to the 1990s where the dialogue between East and West is not about highlighting differences and exoticness, but about hybridity and collaboration.