Narratives in Contemporary Indian Art. The exhibition covers over 3 decades, from the 1980s to the present, by tracing certain critical moments in Indian art, through which a particular kind of narrative was constructed. By representing scenes from everyday life, fictive happenings, mythology and satire as well as autobiographical, societal and historical material, the contributing artists will reflect an India that has changed economically, politically and socially over the last 3 decades. 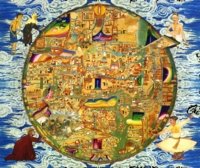 Horn Please brings together different versions of the present in a narrative format by artists who have lived for the most part of their lives in India, and have responded to both the changing and apparently unchanging faces of the country. A country that has been transformed in the last few years by the economic and social implications of globalization, the rapid proliferation of new technology and its commercial aspirations to play a role on the global stage.

Perhaps the most important challenge that the artist in the 21st century faces is the question, is it possible to remain true to one's art practice in an age of "money, adulation… creeping conservatism… and the apparent collapse of an alternative to capitalism?" But the works in this show also reflect on what it means to live in a place that has always been both vulnerable to and enriched by heterogeneity. And in response to the times, what it means to live in a time when we inhabit not one, but many intersecting, overlapping and disconnected maps, and the effects that might have on the personal, social, political and economic life of the country.

This exhibition begins by calling attention to collisions -- 21st century tales of ecological disaster and national crises; collisions and collusions -- the challenge of interpreting the theme of marriage in these considerably turbulent times; and ends with collusions – where times, places, people, characters from myth and folklore inhabit many intersecting, overlapping and disconnected maps of the world.

Horn Please spans three decades from the 1980s to the present and is loosely constructed around four sections -- Narrating Collisions; Re-imagining 'Place for People' (this is a now mythic exhibition held in 1981, featuring Bhupen Khakhar, Nalini Malani, Gulammohammed Sheikh, Vivan Sundaram, Jogen Chowdhury, Sudhir Patwardhan and art critic Geeta Kapur); Re-telling Stories/Telling Metaphor; and Living in Alicetime. The stories weave back and forth across shifts in media and temporalities without tracing a history or lineage. The exhibition with its breaks in style, its digressions and diversions, its diversity in points of view and 'narrators', has a structure which allows the viewer to reconstruct a different story with each reading.

The project is curated by Bernhard Fibicher, curator of contemporary art at the Museum of Fine Arts Bern and Suman Gopinath, independent curator and a partner at Colab Art & Architecture, Bangalore. A catalogue in German and English will be published by Hatje Cantz and distributed worldwide. A special programme with films and, in particular, literature, will accompany the exhibition: for details see http://www.kunstmuseumbern.ch