Four Decades of Art from the Broad Collections. Featuring key works by 24 leading artists of the 1960s through the present, such as Jasper Johns, Andy Warhol, Roy Lichtenstein, Jeff Koons, Cindy Sherman, Charles Ray, and others, Jasper Johns: more than 100 paintings, sculptures, and photographs. These works exemplify important trends from the second half of the 20th century, including American Neo-Dada and Pop art, conceptually based work, U.S. painting from the 1980s, German Neo-Expressionism, and current art from Los Angeles. 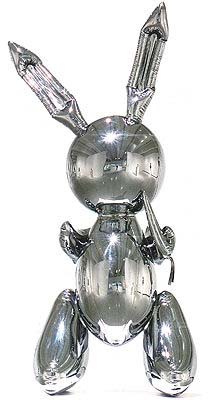 Jasper Johns to Jeff Koons: Four Decades of Art from the Broad Collections is the first large-scale exhibition of works from the collections of Eli and Edythe Broad. Based in Los Angeles, the Broads have amassed one of the finest collections of contemporary art internationally, and the exhibition seeks to capture the breadth, depth, and exceptional quality of their holdings. Jasper Johns to Jeff Koons highlights significant groups of works by 24 artists represented by more than 100 paintings, sculptures, and photographs. These works exemplify important trends from the second half of the 20th century, including American Neo-Dada and Pop art, conceptually based work, U.S. painting from the 1980s, German Neo-Expressionism, and current art from Los Angeles.

The exhibition draws from the Broads' personal collection and the holdings of The Broad Art Foundation. Developed over the past 30 years, these collections span four decades and include some of the most emblematic works in the history of postwar art, among them classic examples by Jasper Johns, Andy Warhol, and Roy Lichtenstein. The exhibition features paintings such as Johns's Watchman (1964), Flag (1967), and Untitled (1975), his first crosshatch painting; Warhol's iconic depictions of Marilyn Monroe, Jacqueline Kennedy, and Elvis Presley; and Lichtenstein's I -I'm Sorry (1965-66), as well as his five-part Rouen Cathedral, Set III (1969). An important aspect of the collections is their concentration on major figures from the 1980s, such as Jean-Michel Basquiat, Jeff Koons, and Cindy Sherman. This exhibition offers an opportunity to begin to assess the achievements of that decade from an art-historical perspective.

The exhibition is organized in five sections, beginning with the work of Johns and Robert Rauschenberg, whose assemblage pieces are shown alongside Cy Twombly's canvases covered with graffiti-like marks. Seen together, these works illuminate the artistic dialogue that helped shape the development of these artists. Growing out of Abstract Expressionism, which dominated the New York art world in the 1950s, they employed an expressive style of painting but focused attention on subject matter drawn from the immediate physical world rather than on the transcendent qualities inherent in paint. Through their incorporation of found objects and use of vernacular forms, Johns and Rauschenberg laid the foundation for Pop Art - in which the Broad Collections have outstanding holdings.

In the early 1960s, Pop Art burst upon the scene. The second section of the exhibition includes the full range of Lichtenstein's oeuvre, from his comics-inspired images to the works rooted in the history of art. It also showcases the Broad Collections' impressive breadth of Warhol's silk-screened canvases. Warhol utilized Pop toward an entirely different end than did Lichtenstein. By conceptually and literally reframing events and their documentation, and by recontextualizing mass cultural icons, he formed a critique of American society. Ed Ruscha's L.A.-based Pop, also represented in this portion of the exhibition, views its particular milieu through a distinct lens. Devoid of figuration, Ruscha's paintings of words force the viewer to reexamine their meanings, while his images that map the city question the way that we understand and navigate our immediate surroundings. Like Ruscha, John Baldessari is one of California's most renowned artists. Conceptual at its base and utilizing imagery from mass culture, his work forms a bridge within the exhibition between U.S. Pop and European Conceptualism.

The third section of the show presents outstanding examples of German art from the past 30 years. Conceptual artist Hans Haacke is represented by a politically charged installation piece, Oelgemaelde, Hommage a Marcel Broodthaers (Oil Painting, Homage to Marcel Broodthaers) (1982), which was a gift to LACMA from the Broad Art Foundation. The room-size installation typifies Haacke's critique of social systems in the world of art and politics. Rounding out this section, mixed-media canvases by Anselm Kiefer, which are deeply rooted in German history, are shown alongside Stephan Balkenhol's wood sculptures, creating a somber and nostalgic mood. Kiefer's monumental paintings deal with themes of German nationalism, culture, and history, bringing to light issues surrounding World War II that were banished from public discourse in postwar Germany.

The fourth section of the exhibition is dedicated to U.S. art of the 1980s. Following in the tradition of Pop art, Jeff Koons transforms banal - even kitsch - subject matter into seductive objects that raise questions about cultural values and the commodification of art. The show offers the first U.S. viewing of his monumental Balloon Dog (1994-2001) sculpture. The work of graffiti artist Jean-Michel Basquiat addresses issues of race and marginality in the politicized, overheated art world of New York in the 1980s. Cindy Sherman, whose photographs form a significant focus of the Broad Collections, explores questions of female representation and violence of various kinds, using familiar visual conventions from Renaissance painting to contemporary mass media.

As economic prosperity skyrocketed throughout the 1980s, so did the art market. With painting as the medium of choice, many young artists became overnight sensations and art world stars. In addition to Basquiat, the exhibition features works by New York painters Ross Bleckner, Eric Fischl, Susan Rothenberg, David Salle, and Julian Schnabel. Bleckner's quasi-abstract canvases deal with loss and remembrance during the AIDS epidemic that swept the United States in that decade. Fischl's psychologically charged, stage-like scenes depicting fragmented but highly suggestive narratives seem to belong to the realm of dreams or fantasy. Schnabel is represented by one of his signature plate paintings, The Walk Home (1984-85), in which he uses fragments of china plates to create a dramatic, sculptural canvas.

Credits: This exhibition was organized by the Los Angeles County Museum of Art.

Accompanied by a major catalogue, the exhibition tours the United States and Europe through 2003.