The fall season will feature one-person exhibitions of two American-born artists, along with an exhibit of videos created by women Indian artists. "Tom Sachs: Logjam", "Steve Miller: Spiraling Inward", and the video portion of "Tiger by the Tail! Women Artists of India Transforming Culture". 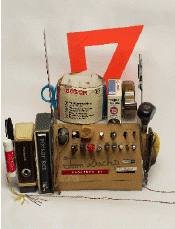 The fall season will feature one-person exhibitions of two American- born artists, along with an exhibit of videos created by women Indian artists. “Tom Sachs: Logjam;” “Steve Miller: Spiraling Inward;” and the video portion of “Tiger by the Tail! Women Artists of India Transforming Culture” will open on Sept. 25 and continue through Dec. 16, 2007.

Tom Sachs is known for his effusive installations and constructions of a variety of objects more commonly found within the public or commercial domain. “Logjam” augments the prevailing discussion of Sachs’ critique of consumer culture by highlighting two bodies of work that focus on the actual making of art objects. Twelve installations consisting of Sachs’ highly significant “work” and “living” stations, along with a video showing a day’s activities in the artist’s studio, clearly exemplify the artist’s sense of play. His “living” stations function to support day-to-day activities, while his fascinating and often obsessive “work” stations allow the viewer to peer into the rarely seen spaces in which he works. Arguably Sachs’ most personal exhibition to date, “Logjam” explores why he is driven to fabricate objects and how he chooses to make what he does. Jeff Fleming, director of The Des Moines Art Center, curates the exhibition, which will be Sachs’ first solo museum show in the U.S.

Steve Miller has been exploring the boundaries between art and science for more than 20 years. Featuring more than three-dozen paintings and drawings, “Spiraling Inward” will offer a comprehensive view of the artist’s attempt to capture visually the most basic functions of living organisms. For the past five years, Miller has been working with Nobel Laureate and Brandeis alumnus Rod MacKinnon to translate MacKinnon’s research in biochemistry into a visual form. Miller’s paintings and drawings are first and foremost works of art, not strict visualizations of scientific experiments. They are unique and personal. With references stretching from Picasso and Warhol to Rauschenberg and contemporary laboratory imaging techniques, Miller’s work transforms the canvas into a locus of beauty and inquiry.

Miller is known to have said that everything he does “looks at the world through the lens of technology.” Like the painter Vija Celmins who miraculously manages to translate the universes glimpsed in a night sky to the small frame of a canvas, Miller takes the invisible worlds of proteins and molecules and renders them palpable within the confines of a canvas - a canvas that has been prepped not only with paint, but in any given work, with a digital photograph, a sonogram, an MRI or a DNA code. Curated by Michael Rush, Rose director, this is the artist’s first solo museum exhibition in the United States.

The Rose will showcase videos created by three female Indian artists – Shilpa Gupta, Sonia Khurana, and Navjot Altaf – as part of “Tiger by the Tail! Women Artists of India Transforming Culture,” in collaboration with the Women’s Studies Research Center (WSRC) at Brandeis. As Indian art breaks forth on the global scene, women are leading the way. Socially engaged and politically active, these artists examine the dramatically changing role of women in Indian society. They critique oppressive and restrictive social norms and confront stereotypical representations of the female. The exhibition as a whole will bring together the work of 17 Indian women artists, working in sculpture, painting, photography, and video, whose strong, feminist voices provide new models for the empowerment of women. The exhibition is curated by Wendy Tarlow Kaplan, curator of the WSRC; Elinor Gadon, a scholar at the WSRC; and Indian curator Roobina Karode.