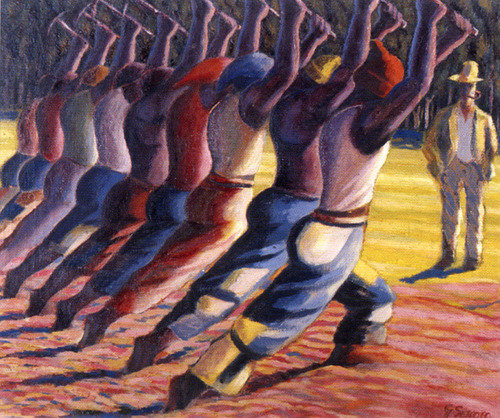 Apartheid. The South African Mirror is a conceptual and visual approach of the old and new forms of prejudice and racial discrimination, based on a wide selection of original artistic works and documentary material. It shows the main stages and characteristics of a tragically famous history which speak not only of the South African experience, but of its European legacy. It explains how these prejudices constitute even today a powerful instrument for justifying and maintaining the most arbitrary injustices. To illustrate this historical narrative, a wide selection of South African works of art from the nineteenth century to the present day is presented. Some of the works, such as in the case of Jane Alexander, Conrad Botes, Nandipha Mntambo, Zwelethu Mthethwa and Peter McKenzie, have been especially produced for this exhibition.


The popularization of a Eurocentric viewpoint

The exhibition begins with a historical approximation to racism, and documents the development of the ideologies that establish different categories of human beings –the “races”– in the same period paradoxically, in which modern ideas defend equal rights for all individuals. The different exhibitions by “primitives” which were held in Spain, and particularly in Barcelona, between 1897 and 1929 were a genre of spectacle, of real “human zoos”, common in Europe since the 1870s. They contributed decisively to the construction of a Eurocentric viewpoint and the legitimization of colonial policies. In order to defend the “purity of blood” of the white race, pseudoscientific movements in economically “advanced” countries like the United States or Germany would ultimately define the theory of eugenics.


The building of apartheid

The central part of the exhibition shows in detail the social, political, economic, cultural and territorial system of apartheid in force in South Africa between 1948 and 1994. It starts from the Boer War and explains how the peace between the white races was achieved at the cost of the population defined as non-white. The arrival to power in 1948 of the National Party was the culmination of a campaign by the Afrikaner nationalists to impose their hegemony over the whole of South Africa. Largely based on a racist reading of the Bible, the programme promised to expel blacks from the cities and guarantee the privileges of Afrikaners by means of the generalization of discriminatory and repressive measures. This section includes works rarely seen outside South Africa, by artists such as Albert Adams, Dumile Feni, David Goldblatt, Gavin Jantjes and Durant Sihlali.


The road to inferno

The first resistance movements against apartheid were peaceful. Even so, the repression against these movements was so violent (the Sharpeville massacre with 69 deaths is the most well-known episode) that the seeds of a more radical resistance movement grew, which would reach the point of no return with the students’ revolt in Soweto in 1976. In the middle of the sixties, and especially due to the revolt initiated in Soweto and the assassination of Steve Biko, South African artistic creation experienced an extraordinary impulse, with the participation of artists of all colours and from all backgrounds like Jane Alexander, William Kendritge, Ezrom Legae, Sfiso Ka Mkame, Billy Mandindi and Paul Stopforth. The South African experience shows that it is possible to escape from an inferno such as this, although the healing of the wounds is a long and difficult process. In spite of the profound transformations carried out since 1994, many of the inequalities created by apartheid still remain, and resentment among “racial” groups is unfortunately still alive. A considerable part of the new creativity has an introspective air, which puts emphasis on individual experience.


Towards a new apartheid?

The exhibition demonstrates that over the last two decades new forms of racism and even apartheid have been appearing on a large scale, both within our democratic societies as well as, and especially, in the relationship between rich and poor nations. This situation consists of a dramatic concrescence of systems of tanks and border walls, tangible or intangible. These barriers and systems of surveillance are justified with arguments very similar to those used by the ideologues and promoters of apartheid who combined a ruthless practice of white supremacy with a formally condescending and patronizing rhetoric on the virtues of “separate development” between the different “racial” groups.