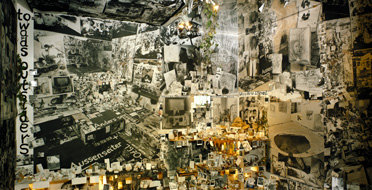 The Generali Foundation presents the first comprehensive solo exhibition of the works of German artist Anna Oppermann (1940-1993) in Austria. Seven large Ensembles that demonstrate both her artistic development and the substantial interconnections that integrate her oeuvre are on view.

“Ensembles” is the title that German artist Anna Oppermann gave to her large-scale installations, which she developed over the course of years. She first presented these strictly methodical arrangements of drawings, photographs, objects, things she found, and painted canvases in Hamburg and Trier in the early 1970s. This special mix of conceptual, processual, graphical, and spatial art quickly gained the artist international recognition. Oppermann participated, among other important exhibitions, in documenta 6 and documenta 8, held in Kassel, as well as the biennials in Venice (1980) and Sydney (1984), and received prestigious awards.

Anna Oppermann’s oeuvre is exemplary of, and at the same time stands unique among, the art of the 1970s. Today, her installations have come to be most timely, as the artist early on anticipated present-day practices and themes.

“The form of the Ensemble is my offer of interaction. It appears to some to be subjectivist, autistic, monomaniacal. And yet I would like to be a mediator between the different disciplines, between reason and sensual perception, between art and science, between ordinary citizen and outsider.” (Anna Oppermann)

Oppermann saw the world and human relations as “Ensembles,” as mutable constellations of perception and reflection, of norms, stories, emotions, and theories. She believed that “complexity must still have value somewhere in this world.” Observing her private and social everyday life in detail, she sought to find objects, images, and concepts that seemed to her to encapsulate its abysses, absurdi- ties, and areas of conflict. She made drawings, photographs, pain- tings, described what she found, she collected texts and quotations, and arranged all these components in Ensembles. These installa- tions were photographed from various perspectives and in changing constellations and the photographs were then in turn integrated in new stagings, lending her works their unique openness.

The individual Ensembles develop not in a linear way but in ramified and cross-linked episodes; they grow in time and space and obey no clear chronology, nor is such a chronology palpable in Anna Oppermann’s oeuvre as a whole. The exhibition reinterprets and thus restages seven Ensembles that display some of the artist’s central themes and her diverse strategies, and document mutual references and formal developments between the works ranging from 1968 to 1992.

Her engagement with the relation between appearance, reality, and I/Self, which shapes Anna Oppermann’s entire artistic work, is the dominant theme in her early "Mirror Ensemble" (1968–1989) as well as her last large scale work, "Paradoxical Intentions" (1988–1992), which face each other in the exhibition. A second pair is formed by the Ensembles "Being Different" (1970–1986) and "Being an Artist—On the Method" (1978–1985), which revolve around themes such as the state of being an outsider, norms and their violation, inclusion and exclusion. The work programmatically entitled "The Artist’s Task to Solve Problems" (1978– 1984) presents Anna Oppermann’s attempt at a poetic-ironical exploration of space. The ivory tower, as the site to which artists and scientists retreat, is contrasted with divergent models of social space. "Portrait of Mr. S." (1969–1989), with its baroque colors, shapes, and naked bodies, represents another thematic threat: relations with others, with strangers and friends, and between the genders. The Ensemble "Gesture of Pathos—MGSMO" (1984– 1992) is a result of Oppermann’s reflec- tions upon the economic aspects of making art and of the art mar- ket. In addition, the Generali Foundation is showing the nine-part image series "Dilemma of Communication" (1979), in which Anna Oppermann represents, with polemical irony, the problems she often faced in presenting and mediating her works.