Works from the Friedrich Christian Flick Collection. Featuring objects, drawings, photographs, Super-8 films and videos, the exhibition offers a representative insight into his complete oeuvre tracing back to the early 1970s. In the summer of 2007 the artist performed an action in the landscaped gardens of Worlitz in conjunction with his forthcoming exhibition in Berlin; the film produced in Worlitz is also on show in the exhibition. The artist also installed his outdoor sculpture ''Kieskegel und Kajak'' (Gravel Cone and Kayak), 2006/2007 in the courtyard of the Hamburger Bahnhof for this occasion. 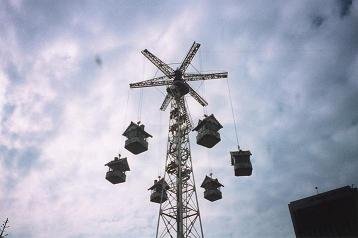 The work of Roman Signer (b. 1938, Appenzell) stands out for its unusual approach towards the phenomenon we refer to as sculpture. With his objects, actions and films, Signer adds a further dimension to the concept of sculpture as we know it, a medium which, in the course of the ongoing subversion of traditional boundaries launched upon in the 1960s, had already been expanded to include unconventional materials and actions.

Put simply, he examines the basic elements of fire, water and air in terms of their sculptural qualities, albeit not in the manner of Land Art, which tends to effect an overt rearrangement of natural materials within or upon the landscape. Rather, although they also frequently take place outdoors, Signer’s sculptural actions are experiments that temporarily make use of the physical laws of the materials he incorporates, such as the thrust forces of rockets, fans, superchargers or even that of water. His performance technique anticipates the sensation of radically condensed time, a sensation most effectively transmitted by explosions. The majority of his actions are conducted in the absence of an audience; what remains are films and photographs which are not only documents but works of art in their own right.

For a rocket ignited by the artist to fly through the forest, for example, its trajectory must be precisely calculated in order to prevent it from simply smashing into the nearest tree – not the easiest of feats in a forest. Undertakings of this kind are unthinkable as public performances. Indeed, it is only the photograph depicting the horizontal vapour trail of the rocket that serves to capture the poetry of such an action (Rakete, 1978). It is an image at once enigmatic and aesthetic. Many works by Roman Signer ironise our basic understanding of physics in a poetic manner. The element of the absurd acquires a poetic dimension in his works, for not only is the impossible planned and carried out but also works as well. We all know that one could catapult an ordinary stool out a window or that by lining window shutters with rockets and igniting them, one could burst the shutters open with the force, not to mention the impressive sparks that would come raining down too (Aktion Kurhaus, 1992).

Yet no one apart from Roman Signer would come up with the idea of actually doing so in the first place. Which physicist would go to the bother of testing the friction forces of a canoe being dragged along the country roads of Switzerland by a car until the canoe was so worn down that he was sitting on bare asphalt? Or who would fire red ribbons across the igneous gases of Stromboli to admire, for a fleeting moment, the writing on air? The volcano and its eruptive processes, its spellbinding drama, the constant anticipation of an eruption and the grandeur of the geological spectacle are all key figures in Signer’s work. It is only natural that he is attracted to these sensational, fire-breathing mountains, and that he models his sculptures on their processes in a kind of volcanology en miniature.

Once the exhibition at the Hamburger Bahnhof was decided upon, it thus made sense to draw the artist’s attention to a special volcano. Erected towards the end of the eighteenth century not far from Berlin, the volcano in question is a brick construction with natural stone cladding that is crowned by a replica of Vesuvius situated in the Gulf of Naples. This artificial island in the landscaped gardens of Wörlitz was built by a man with whom Signer, on grounds of his artistic innovation and interest in volcanology, appears to share a strong affinity – Prince Leopold Friedrich Franz von Anhalt-Dessau (1740–1817). The continuation of this wonderful story over two hundred years later by an artist of Roman Signer’s ilk seemed so natural that the board of the cultural foundation of Dessau-Wörlitz generously and unreservedly granted the artist one “terrifying explosion” at Vesuvius.

In spring 2008 the exhibition will tour to the Rochester Art Center in Rochester, Minneapolis/USA.

An edition of the magazine “Museum für Gegenwart” will be published to accompany the exhibition. The magazine features a comprehensive survey in texts and images of the artist’s works on the theme of volcanoes and also includes a conversation between Eugen Blume and Roman Signer on “Thinking Volcanoes” which took place during the summer of 2007 in Berlin.