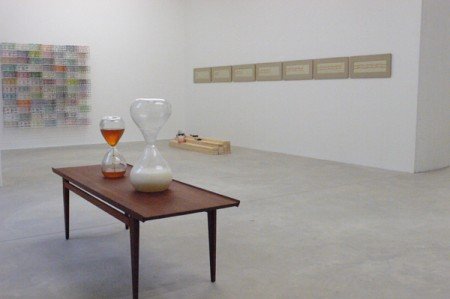 Galerie Nordenhake is pleased to present ‘Drawing A Tiger’, a group show opening at the gallery’s new location at Lindenstrasse 34. The exhibition title comes from a work by Hreinn Fridfinnsson made in 1972, where the Icelandic artist combines two photographic self-portraits, both as a child and as an adult, in the act of drawing. Here, Fridfinnsson's lyrical opposition takes into account the notions of imagination and repetition: the two different situations are drawn together by the power of intuition and memory. In the same way, the artists gathered together in the exhibition explore the relationships between past and present, form and material, as well as the link between different generations of artists.

Following this logic, Christian Andersson presents ‘Looking Backward 2000-1887’, a work based on the 1888 novel by Edward Bellamy of the same name. An original copy of the book standing in a display case evokes a museal aura. On closer inspection one realises that the book does not cast a shadow. This gives the whole installation a ghostly appearance. The book magically goes against the laws of physics. Comparably, its by-now failed utopian content shows a history of reception that has taken on a life of its own. Individual and collective elements are combined in Sirous Namazi’s modular structures, a downscaled prototype of an architectural unit. As if straight off the production line, these modules are assembled to make combinations of different volumes and colours. Reminiscent of Sol LeWitt’s objects and with a colour palette deriving from the painting of Mondrian, Namazi continues to address his interests in the themes of architecture, minimalism and ready-mades.

Working with miniature models of landscapes, Johan Thurfjell is particularly attentive to detail and what it reveals. In ‘Eight Dreams’ he reconstructs a familiar environment, trying to define an intimate geography for his imaginary world. In Suchan Kinoshita’s intervention, time is a phenomenon that cannot be measured or defined in codified terms. Her ‘Clock’, a couple of hand made hourglasses, combines different technical imperfections in order to convey a chain of unpredictable reactions in what is supposed to be a mechanical process. A new sculpture by Helen Mirra combines a shipping pallet with two geologically different rocks. Drawing on a minimalist vocabulary of repetition and reductive forms to bring in narrative, poetics and the personal, Mirra's sculptural work explores themes of labour, transportation and expansionism. Her rigorous and lyrical use of material creates a dialogue with Hreinn Fridfinnsson’s photographic series ‘Seven Times’, a new version taken from an original negative made in 1978. Two collages by the Austrian artist Hans Schabus explore the notion of project and its realisation, such as Kristjan Gudmundsson’s ironical installation ‘Seven Days Sculpture For A Man With A Dog’, a work made in the early ‘70s. Both artists' work engages structural and conceptual logic, resulting in a makeshift and uneasy beauty.

The generational bridge between historical Conceptualism and Neo-Conceptual attitudes is completely broken by a film made in 1943 by Maya Deren, ‘Meshes Of The Afternoon’, considered as one of the most influential works in American experimental cinema. Open-ended and interrupted events, repetitive narrative elements and symbolic objects are central to the structure of the film, as they are for the whole exhibition. Rather than having a single medium or a theme in common, the works, in fact, share a similar conceptual attitude, a process consisting of a particular associative strategy.