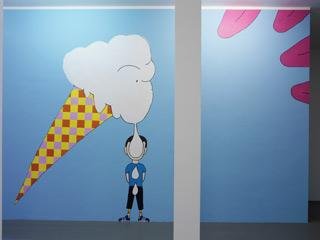 BODYPOLITCX is an international group exhibition - with extensive sideprogramme of debates, performances and workshops - seeing sex through the eyes of over 70 artists, film-makers, activists, photo-journalists, musicians and magazine editors.

Note: Restricted to visitors above 18.

'A censor is someone who knows more than he thinks you ought to.' (Lawrence Peter)

In Europe during the Middle Ages, sexuality was an unknown concept. Sexual intercourse and masturbation were taken for granted and were not stigmatized with shame. Irrespective of gender, satisfying one's desires was seen as a way to remain healthy. Not until the 16th century - with the beginnings of industrialization, the division of labor and hence a greater emphasis on social- and self-control - was a lack of sexual discipline declared taboo, and sexuality banished to the private domain. The concept of 'modern pornography' arose with the expansion of printing during the 18th century. Initially it was used by free-thinkers as a tool to criticize the religious and political authorities, and was not primarily intended as a means of sexual stimulation. Only with advancing industrialization and the invention of photography did pornography become a category in its own right.

With a focus upon the 20th and 21st centuries, this exhibition takes a contemporary look at an age-old fascination, seeing sex through the eyes of over 70 artists, film-makers, activists, photo-journalists, musicians and magazine editors. By means of visual juxtaposition, the exhibition sets out to examine the demarcation of the sex industry, subculture, pop, performance and art. BODYPOLITCX asks: If we have learnt from Shakespeare what love is, what can we learn from the cultural practice of pornography?

BODYPOLITCX is supported by the Mondriaan Foundation, Amsterdam, and September in Rotterdam.