Barbora Klimova, Tomas Dzadon, Jan Vasilko. Video and more. The exhibition presents works from three young Slovak and Czech artists who have confidently been participating in the domestic art scene but mainly who have sufficiently been preoccupied with an idea of a project in their own work. Curated by Petra Feriancova. 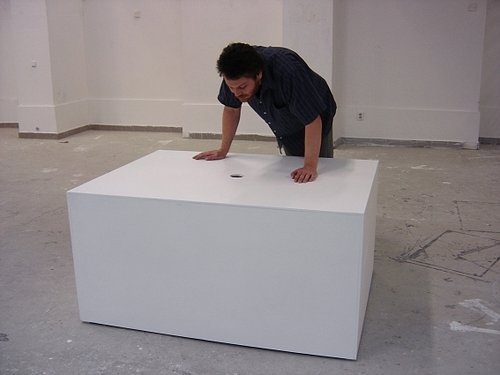 The exhibition Re:Place, with the original title twin city, is initiated by Siemens Art Lab project and curated by artist Petra Feriancova. The exhibition presents works from three young Slovak and Czech artists who have confidently been participating in the domestic art scene but mainly who have sufficiently been preoccupied with an idea of a project in their own work.

The exhibition Re:Place will last till 3 November and then it will be transfered to Bastart Gallery in Bratislava. New situation, space and context will reflect the main idea of the exhibition - relocation, when the meaning of the work is determined by a place. The name of the exhibition has an ambivalent meaning. If we read it or see it written, there is a reference to an above mentioned place. If we only hear it pronounced, it evokes an exchange, replacement. Selection of the works intends to involve both these phenomenons that a curator finds very interesting for the project taking place in the two cities so different but related at the same time.

The cultural differentiation or politically engaged art are not sought-after aspects of the project. It is more about an authentic and specific message of the participating artists, infallibly dealing with a contemporary art language that is sufficiently universal, able to establish a personal experience as something generally valid. All the participating artists as well as the curator try to provide us with a convincing expression combining a work with a form, appropriating a space, defining a space often with the philosophical and social overlaps.

The key work of the exhibition is the video REPLACED-BRNO in which its author Barbora Klímová ingeniously put together both above mentioned aspects. The video was awarded the prestigious Jindrich Chalupecky prize. For the project Re:place Barbora chose five performances by five artists that took place in Czechoslovakia in the 1970s and 80s. The main selection prerequisite was that the performances were conducted (or could have been conducted) in a public space. Instead of composed, clearly identifiable performances, gestures or acts that bordered on normal behavior fit her plan. Klimova was interested in what way a public space and everything related to it (urbanism, architecture, as well as social conventions and rules connected to certain places) was transformed. She met with almost all the artists of the original performances and spoke with them of their experiences and why they carried out such performances.

It became evident that, besides a probe into a public space, her project would reflect and alter the way we now view their performances. Young Slovak artist, living in Prague, Tomáš Džadon deals with substitution and relocation, as well. He realized, that big part of our life is filled with products. The designer`s task is to cover the technical part, for him the most important, of products for the purpose of selling. He used that strategy for his sculpture. He hides his grand mother`s home made bacon into a minimal-like shape to show the contrast between how things look like and how they are. Painter Ján Vasilko will contribute five paintings. With their geometric shapes his works often remind of placard art and of a certain tradition based on Russian constructivism. An interest in appliances, machines and tools is quite obvious.

Tomáš Džadon, (SK) was born in 1981. He is a finalist of Essl Award 2007. Currently his exhibition ''Form follows Risk... '' curated by J. Šev?ík, (Tranzit.cz) is on at the National Gallery for Contemporary and Modern Art in Bratislava. Džado?'s oeuvre was also shown at the Process Symposium, River Town Prague, curated by Mark Divo (2006).

Jan Vasilko (SK) was born in 1979 and is a winner of the Oskar ?epan Award 2005, the most prestigious prize for young artists of Slovakia. He had a solo exhibition at Palais Palffy (National Gallery Bratislava) and took part in several group exhibitions, such as ''Young artists from East Europe'' at City Gallery Prague and „Contemporary Slovak Painting at Wannieck Gallery'' Brno (2007).

Barbora Klímová (born in 1977, Czechia) has won the Jan Chalupecky Award for her video installation ''Replace'', which will be shown also in the ''Re:Place'' exhibition at Siemens_artLab. In 2005 she had a solo exhibition at Moravian Gallery Brno. And in 2006 she exhibited her works at the Brno House of Arts.
Petra Feriancová (Slovakia) was born in 1977 and studied in Rome. She is represented by the Prague gallery Jiri Svestka and the Roman gallery Valentina Moncada. In 2006 she founded Bastart Gallery
Re:place will also open at Bastart in November including works by Volker Eichelman and XYZ.