Four works. The exhibition blends electronic sounds and visual effects into highly energized environments that engage sensory perceptions. In "static balance" ambient noise bounces off the surface of parabolic mirrors producing an acoustic field of varying density according to your location within the installation. Curated by Gregory Volk. 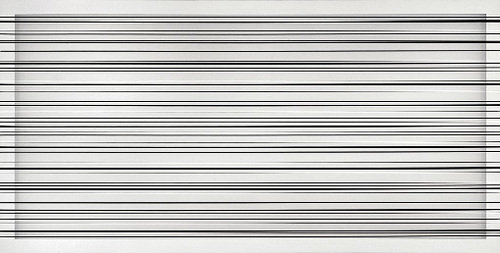 PaceWildenstein is pleased to present new work by Carsten Nicolai in an exhibition entitled static balance from October 5 through November 3, 2007 at 534 West 25th Street, New York City. The artist will be present at a public reception held on Thursday, October 4th from 6-8 p.m. Carsten Nicolai’s fusion of art and music has led to exhibitions and performances worldwide. static balance, Nicolai’s first exhibition with PaceWildenstein, blends electronic sounds and visual effects into highly energized environments that engage sensory perceptions.

The PaceWildenstein opening is the first of three consecutive evenings devoted to the artist’s work in New York City. On Friday, October 5th at 6:30 p.m., The Goethe-Institut, 1014 Fifth Avenue at 83rd Street, will host a discussion between Nicolai and curator Gregory Volk about the artist’s newest work. Admission is free and open to the public. The following evening Saturday, October 6 at 8 p.m. Nicolai (a.k.a. alva noto) will present Xerrox vol. 2. Created from a variety of ordinary source material ranging from Muzak to television advertising melodies, Nicolai will use a laptop to compress, multiply, and alter this digital information into a video projection of sonic visual abstraction. More information and tickets to the concert are available at http://www.thekitchen.org.

PaceWildenstein will exhibit four works by Carsten Nicolai. In static balance (2007) ambient noise bounces off the surface of parabolic mirrors producing an acoustic field of varying density according to your location within the installation. A second work, fades (2006), mixes mathematical equations—primarily sine functions—and computer-generated images into a gradual increase and decrease of light intensity. White noise fills the space, and the light beams’ three dimensional qualities are accentuated by lingering stands of mist. static parabol 1 and static parabol 2 are two large horizontal wall works measuring 6 ½ feet by 13 feet. Without sound these static works evoke the pure pattern of their mathematical design.

Carsten Nicolai (a.k.a. noto, alva noto) currently lives and works in Berlin. Born in 1965 in Karl-Marx-Stadt (Chemnitz) Germany, Nicolai studied landscape design from 1985-1990 in Dresden. In 1992 he co-founded the Voxxx.Culture and Communication center, in Chemnitz (Voxxx.Kultur und Kommunikationxzentrum). Nicolai began gaining notoriety in the music community in 1994 when he founded noton.archiv fuer ton und nichtton as a platform for conceptual and experimental related projects in music, art and science. Nicolai frequently performs his music under the pseudonyms noto or alva noto. His music combines video projection with sonic abstraction and minimialistic, post-techno mixing. In 1999, Nicolai fused the company he founded, noton, with rastermusic which was founded by Olaf Bender and Frank Bretschneider to form raster-noton.archiv für ton und nichtton.

The artist has been awarded numerous prizes and scholarships beginning in 1990 with the Jürgen Ponto prize, Frankfurt. In 2000 he was awarded the Philip Morris Graphic Award in Dresden, Germany and the Prix Ars Electronica Golden Nica Award for Digital Music for the “20 to 2000 project” in Linz Austria. The Prix Ars Electronica Golden Nica Award for Interactive Art was again awarded to him in 2001 for “Polar”, an installation created in collaboration with Marko Peljhan. Nicolai was the 2004 Artist in Residence at the Villa Aurora in Los Angeles, and three years later he was the Visiting Artist for Deutsche Akademie Rome at Villa Massimo in Italy. In 2007 he was the first artist ever to receive the newly created Zurich Prize from Haus Konstruktiv.