Conceived as a visual dialogue between American and British Pop Art, this exhibition brings together 52 key works by 28 Pop artists working on both sides of the Atlantic in the 1950s and 1960s. These include major portraits by Andy Warhol, Robert Rauschenberg, Jasper Johns and Roy Lichtenstein alongside those of Peter Blake, Richard Hamilton, David Hockney and Patrick Caulfield. Curated by Paul Moorhouse. 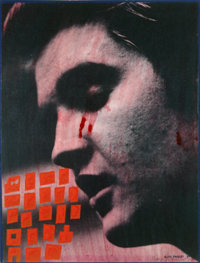 A groundbreaking exhibition Pop Art Portraits - the first to explore the role and significance of portraiture within one of the world's most popular and influential art movements - opens at the National Portrait Gallery on 11 October. Conceived as a visual dialogue between American and British Pop Art, this exhibition brings together 52 key works by 28 Pop artists working on both sides of the Atlantic in the 1950s and 1960s. These include major portraits by Andy Warhol, Robert Rauschenberg, Jasper Johns and Roy Lichtenstein alongside those of Peter Blake, Richard Hamilton, David Hockney and Patrick Caulfield.

The exhibition examines these artists' shared engagement with depicting the famous, using images taken from advertising, pop music, the cinema, magazines and newspapers. It also shows how Pop Art shattered the conventions of portraiture, creating a new genre of fantasy portraits using comic books, magazines and other images drawn from popular culture.

The exhibition explores Pop Art's complex and enormously creative engagement with portraiture and is divided into six sections: Precursors of Pop; Portraits and the Question of Style; Fantasy; Film; Marilyn; Innocence and Experience. The Marilyn section is one of the highlights of the exhibition, bringing together works by British and American Pop artists in the context of their shared obsession with images of Marilyn Monroe. Presented as a secular chapel to one of the late 20th Century's goddesses, the exhibition reunites several important works originally shown in the celebrated tribute exhibition, Homage to Marilyn Monroe, held at Sydney Janis Gallery, New York, in 1967. This section focuses on one of the principal themes of the show: the way Pop portraits transformed familiar images into works of art of great technical virtuosity, lasting originality, and enduring fascination.

Sandy Nairne, Director of the National Portrait Gallery, London, says: 'Pop Art Portraits creates an exciting opportunity to see an important art movement in a new light - the idea of the portrait is extended through the work of these artists.'

Jeremy Isaacs, Chief Executive Officer for Lehman Brothers, Europe and Asia, says: 'Innovation is central to our business at Lehman Brothers and goes hand in hand with inspiration. That's why we are delighted to be supporting the Pop Art Portraits exhibition. It demonstrates our belief in the arts as a force to inspire and challenge our thinking and to enrich all our lives. In particular we applaud and thank Sandy Nairne and Paul Moorhouse for their vision in putting together this major exhibition.'

DIANA, PRINCESS OF WALES (14 Jul 2007 - 14 Jan 2008)
Diana, Princess of Wales (1961-1997) was one of the most photographed women of recent times. This display of photographs, coinciding with the tenth anniversary of her tragic death, looks at her life in the public eye as a royal wife, mother, high-profile charity worker and international fashion icon.

MAKING HISTORY: PRINTED PORTRAITURE IN TUDOR AND EARLY STUART BRITAIN (7 Jul 2007 - 9 Dec 2007)
Long before the age of photography, printed portraits served a growing public appetite to gaze upon the features of men and women whose exploits and achievements had excited public interest. From the mid-sixteenth century onwards, the great and the good (such as naval heroes, military commanders and the nobility) and the not so good (such as convicted traitors) were portrayed by engravers. Exploring the visual history of the fame-making process in Tudor and Jacobean England, this display features some of the Gallery’s earliest original portrait prints.

DAILY ENCOUNTERS: PHOTOGRAPHS FROM FLEET STREET (5 Jul 2007 - 21 Oct 2007)
The National Portrait Gallery is to be the first British museum to focus on the history of British Press photography during the 80-year-span of its decisive Fleet Street years. A new exhibition Daily Encounters, opening 5 July, will draw upon the rich and relatively neglected surviving archives of newspaper photography to tell two parallel stories - one of a powerful industry with an internal culture of its own, and the other of the often uneasy relationship that grew between public figures, the photographic press and the wider population of readers.

IN THE MAKING: FASHION AND ADVERTISING (2 Jul 2007 - 14 Oct 2007)
Before the polish of the finished photograph comes a long and laboured process. This new display examines the techniques of contemporary image-making in fashion and advertising through the work of five leading photographers: Elaine Constantine, Warren Du Preez & Nick Thornton Jones, Alexi Lubomirski, Sølve Sundsbø and Paul Wetherell. From working with celebrities to techniques of composition and the use of natural light and digital platforms, the display offers a fascinating insight into industry practice. The style of each photographer is illustrated with examples of their work, displayed alongside portraits of the photographers themselves by Immo Klink.

DEVOTIONAL (16 Jun 2007 - 25 Nov 2007)
Celebrating black female singers in British entertainment, this unique display is the latest development in the ‘Devotional Series’, a body of work by the artist Sonia Boyce. The display takes the form of an elaborately hand-drawn installation on the gallery walls: a roll call of one hundred and eighty names. The names will be illustrated by portraits of several of the singers, among them Shirley Bassey, Joan Armatrading, Des’ree and Ms.Dynamite.

ARTISTS AND SITTERS (21 Apr 2007 - 21 Dec 2007)
As a variation in its traditional policy of giving primacy to the sitter, the National Portrait Gallery will be focusing on the artist in its dramatic re-hang of the late 20th century Collection. Covering the period from 1960-1990, the new hang – entitled ‘Artists and Sitters’ – will take a fresh look at the period by grouping portraits by artist, allowing visitors a clearer sense of particular styles while also showing the great variety of approaches to portraiture of the late 20th Century.