As Simple as your Life used to be 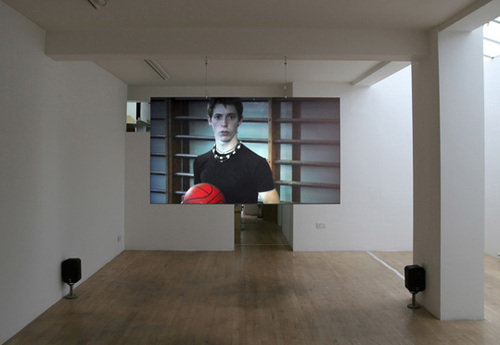 As Simple as your Life used to be

Three retired Italian politicians are interviewed, and all asked about sacrifice. After a life in the public eye, each reflects on the choices they made, about the sacrifices, both intellectual and actual, they chose. They come up with a surprising range of visual motifs – for example, Oscar Mammi, the former Minister of Telecommunications of the mid-80s Craxi administration, locates sacrifice in the figure of the hermaphrodite. This, like the other visual motifs, is the basis of a series of maquettes and air-brush paintings made by Chris Evans as part of his latest project, ‘As Simple As Your Life Used To Be.’

The second part of the project takes the form of a short film. We follow a doomed love story between two teenagers in a Roman school. The girl is besotted, the boy is distracted. But he has reason, for his mind seems to be in the control of an unspecified political agency. In her confusion our heroine turns to a friend for advice as to whether she should make her ultimate sacrifice – turning her lover over to the authorities. But then what other choice are you left with when your lover’s whispered sweet-nothings sound suspiciously like John Robinson’s 18th century text, ‘Proofs of a Conspiracy Against All Religions and Governments in Europe’?

The final part of the project will take place in an underperforming school in the outskirts of Rome, the ancient seat of learning and culture. How to inspire these underwhelming children of emperors? Evans proposes sculptures, which have their beginnings in the maquettes and paintings. Sculptures that embody sacrifice, as envisioned by political leaders of recent history, sculptures which are functioning objects within the school environment. For this is a time in these children’s lives when they become aware of the choices opening up in front of them. Bewildering, empowering, terrifying. Childhood was easy, eating food, going to the toilet, playing, fighting, sleeping. But now the future is less clear, the future is symbolised by a indeterminately gendered stand tap, in the form of an anthurium, that appears in your school mysteriously at the start of what seemed to be just another term.

In collaboration with the British School of Rome